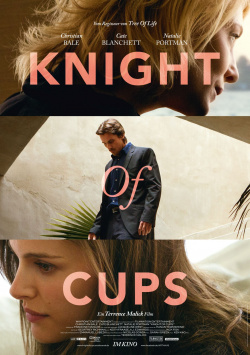 Successful comedy writer Rick (Christian Bale) is trapped in the world of Hollywood's beautiful appearances. He enjoys the presence of beautiful women, has many debauched parties and lets himself go. But he has lost sight of the real meaning of his life. And so he embarks on a quest for the only real truth that will hopefully bring him the happiness that the myth of Hollywood cannot provide...

That's already a very detailed description of the contents of Knight of Cups, the latest film from Terrence Malick. Although - movie isn't really the right term for this work, which actually has nothing remotely close to a classic narrative or any real entertainment value to offer. Ever since Tree of Life, Malick's films have tended to be esoteric slideshows punctuated with pseudo-philosophical whispers anyway. There may have been some justification for that in Tree of Life, and it may have been quite a sensory experience for some viewers. But here the whole thing is just unbearably boring and pointless.

Even with the fascinatingly beautiful imagery Malick can no longer save anything. For since he hasn't varied his style in the slightest for three films now, the visuals, like the rest of the production, just seem tediously repetitive and lack any of the artistic finesse that used to define Malick's work. The fact that there is hardly any real dialogue and the actors only deliver quietly murmured voice-over comments is something the filmmaker has now also used to the point of unbearability. That wouldn't be so bad if these whispered monologues at least had substance. But they are almost completely lacking in Knight of Cups.

There may still be some diehard Malick admirers who will see his latest work as a masterpiece. And they can be forgiven for that. But otherwise, it's unlikely you'll find viewers who will be swept up in euphoria by this nerve-killing sleeper hit. Terrence Malick may have been a gifted filmmaker in the past. But what he has delivered with Knight of Cups is, at best, a nice screensaver with beautiful people. If you want to spend your money on it, you get two hours of relaxing sleep. That's already something. Therefore: only worth seeing for completely unabashed Malick fans who also think To the Wonder is a masterpiece.