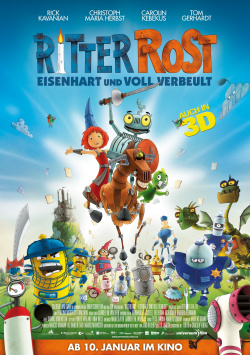 In more than ten musical books, various radio plays, games and DVDs, Ritter Rost, brought to life by author and illustrator Jörg Hilbert together with composer Felix Janosa, has already had several adventures together with his friends, the damsel Bö and the dragon Koks. Now the knight made of scrap metal has finally made it to the big screen.

In his first cinematic adventure, Ritter Rost (voiced by Rick Kavanian) is faced with a big problem right at the start: he actually really wants to win the royal jousting tournament against the vain Prince Protz (Christoph Maria Herbst). But to do so, his faithful horse Feuerstuhl first needs a new engine. And Ritter Rost simply doesn't have the money for that. But luck seems to be with him when he manages to get hold of a brand new engine from a crook in exchange for Bad's beloved sewing machine. Victory in the tournament is thus assured. But Prince Protz does not give in so easily. Not only does he accuse Ritter Rost of being a thief and cheat, he also takes Bö (Carolin Kebekus) into his castle after Ritter Rost has lost not only his title but also all his belongings. Things don't look good for Rost. But together with Koks (Dustin Semmelrogge) and Feuerstuhl he wants to do everything to restore his honor and save his friendship with Bö - an almost impossible undertaking.

Ritter Rost is a 3D CG animated film for a very young audience. With its fairly well-behaved humor, catchy songs, and low-key 3D effects, it should be a lot of fun for little fans of the tinny knight. However, if you're older than 7, the very simple animations alone won't be very appealing. These are perfectly appropriate for the young target audience, as they do not overtax the untrained eyes of children and are limited to essential details. But little animation fans, who are more accustomed to fare like Ice Age, are unlikely to burst into raptures here.

On the other hand, the film can benefit from its well-chosen voice actors. Rick Kavanian makes Ritter Rost a lovable hero who also makes his little fans laugh time and again. And Christoph Maria Herbst once again gets to be really greasy and evil as Prince Protz. Tom Gerhardt also makes a small but very successful appearance as the dangerous dragon, who provides a few nice laughs in the last third. This is good, because the movie has some scenes at the end, which might scare young viewers a little bit. And it's just good to be able to laugh heartily in between.

Ritter Rost is a nice animated adventure for kids between the ages of 4 and 6. However, unlike many other CG animated films, it is purely a children's film and not a family film, as it is geared towards its target audience in terms of visual style as well as humour and its dramaturgy, and offers little entertainment value to older viewers. But for the audience the film is made for, it offers a lot of fun, songs that immediately encourage you to sing along, pleasant suspense and 3D that doesn't slay but merely amazes little children's eyes. And for this there is then also a deserved: Worth seeing!