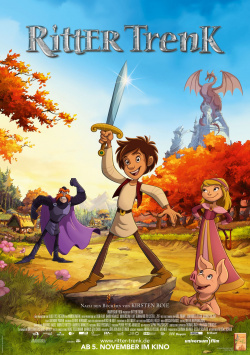 Trenk dreams of being a brave knight one day. But as a poor peasant boy, the odds are truly not in his favor. He is destined to be a serf of the ruthless liege lord Wertolt for the rest of his life. When Trenk's father is unjustly thrown into prison one day, the boy decides to become a knight anyway in order to free his father. In order to do this, he has to take part in a knight tournament of the prince, the winner of which is then allowed to go into battle against the dragon living in the forest. Whoever masters these two tasks victoriously has one wish free. For Trenk and his family, this wish would be the only way to freedom. But how is he supposed to make it to the jousting tournament in the first place?

The adventures of Kirsten Boie's brave knight Trenk have captivated many children since the first book was published in 2006. The popularity of Trenk and his friends was further increased by the animated series that ran on KiKa from 2011 to 2012. After games and other merchandising, the move to the big screen was only the next logical step. The makers did not simply want to revisit stories that had already been told in the series, but to create a new, great medieval adventure that captures the spirit of the book template and at the same time can also gain new aspects from it.

The result is a pleasantly traditional animated film that can score with lovingly drawn characters, an exciting plot and a lot of child-friendly humor. It is particularly noticeable in a positive light that director Anthony Power and his team have largely dispensed with the rollercoaster effects, snappy pop songs and over-the-top silliness so readily employed in contemporary animated films. The pacing is coherent, but doesn't overwhelm very young viewers with overly quick cuts. The story has plenty of moments of suspense, but they're not too scary for young children. And the humour will make young Trenk fans laugh, without coming across too flat. It may be that this makes the film just not spectacular enough, especially for slightly older animation fans, and that it seems a bit antiquated. But for little adventurers between the ages of 5 and 9, this adaptation has simply become a timelessly beautiful children's film.

Villainous knights, gloomy forests, dragons and tournaments - these are the elements with which this story about courage and friendship can captivate its young target audience. However, the atmospherically drawn landscapes, endearing supporting characters like Trenk's faithful companion Piglet, and some genuinely beautiful moments make the film enjoyably watchable for adult companions as well. So if you are looking for a pleasant contrast to 3D computer animation and want to offer your little ones a really nice, exciting cinematic adventure, Ritter Trenk can be warmly recommended. Absolutely worth seeing