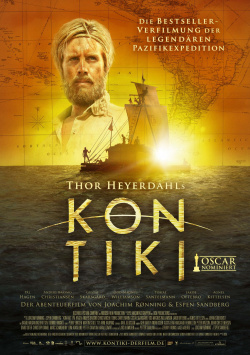 Norwegian explorer Thor Heyerdahl is considered one of the greatest adventurers of his time, revolutionizing the study of migrations with his theory on the seaworthiness of ancient watercraft. His Kon-Tiki expedition, in which he crossed the Pacific Ocean in 1947 with a small team on a self-built raft made of balsa wood, has since become a true legend. The accompanying documentary won an Oscar in 1952 and Heyerdahl's book about the expedition has sold well over 50 million copies. Now Joachim Roenning and Espen Sandberg, who had already delivered an impressive and hugely entertaining history lesson with Max Manus, have memorialised the explorer and his expedition in the most lavish Norwegian film ever made.

In the Oscar-nominated Kon Tiki, the filmmakers recount Thor Heyerdahl's (P&aring;l Sverre Hagen) efforts to prove a spectacular theory. During an extended stay with his wife Liv (Agnes Kittelsen) on a deserted island in the Narquesas group, the scientist comes across relics that, for him, lead to only one conclusion: contrary to all current research, the South Sea islands appear to have been settled from South America. Heyerdahl wants to prove that he is right with this assumption by swimming from Peru to Polynesia on a raft built according to historical drawings. But nobody wants to publish his thesis and certainly not to finance the expedition. It is only through the support of Peruvian President Jos&eacute; Luis Bustamante that the explorer manages to build the raft, assemble a team and set off on the perilous journey. Without any form of modern aid, Heyerdahl and his crew of five sail across the open sea. In the process, the initial enthusiasm soon gives way to bitter disillusionment. Storms, hungry sharks and increasing tensions within the crew may soon bring the expedition to an untimely end.

Kon Tiki is a classic adventure film in the best sense of the word. Thrilling, visually stunning and dramaturgically sophisticated, the voyage on the Pacific Ocean presents itself as quite a cinematic treat. The breathtaking images, which were captured on the open sea off the coast of Malta, but also in Thailand, on the Maldives and in Norway, allow the viewer to experience the hardships, but also the beauty of the expedition at first hand. Of course, the filmmakers took some dramaturgical liberties to increase the entertainment value of the whole thing. Pleasantly, the more exciting scenes and quieter character moments are presented in quite a balanced way. On the one hand, this creates a certain depth, which also allows the viewer to bond with the characters. On the other hand, too dry or even boring passages are avoided, so that the almost two hours running time almost fly by.

While Kon Tiki is peppered with quite a few special effects, they are hardly noticeable as such. The makers have managed to integrate them into the overall picture so well that there is actually not a moment when you are pulled out of the story because of overly obvious computer effects. It may be that the overall pacing, action and dramaturgy feel a bit old-fashioned. But that's exactly the tone that suits this sweeping tale. Kon Tiki is great cinema in the truest sense of the word: fascinating images, an exciting story, good actors and an interesting historical background make this Norwegian cinema success a must-see for all those who don't need superheroes or fantasy creatures for great adventures, but who also like to be carried away by true stories. Absolutely worth seeing