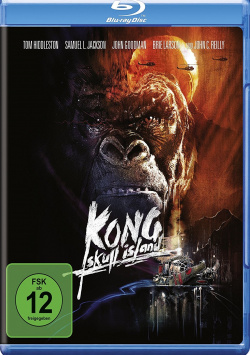 Movie: Just as U.S. troops are sent home from the ended Vietnam War, Preston Packard's (Samuel L. Jackson) is called away to accompany a group of scientists and adventurers on a dangerous mission. They want to investigate the mysterious Skull Island for possible mineral resources and geological features. But as soon as they arrive on the island, they realize that this island would have been better left undiscovered. Because here live all kinds of dangerous creatures from ancient times, all of which are kept in check by a monstrous ape: Kong! But when Kong sees his home threatened by humans and kills many of Packard's men, there is only one goal for the elite soldier: Kong must die. But that could have disastrous consequences for the entire world.

Kong: Skull Island continues the revival of the iconic monsters begun in 2014 with Godzilla, which is expected to eventually culminate in a clash of the giants after a Godzilla sequel in 2020. Despite these grand - and also expensive - plans, the studio didn't play it safe and hire a prominent, experienced director, but instead gave up-and-coming talent a chance. Jordan Vogt-Roberts had so far worked primarily for TV series and on short films, before he could deliver a small indie success and absolute critics' darling with the youth drama Kings of Summer in 2013. That punched his ticket to the big budget blockbuster Kong: Skull Island, which he delivered with aplomb in every sense of the word.

Particularly positive is that Vogt-Roberts has added a self-deprecating wink to many scenes in his production, so that even some sequences that are extremely cliché-laden in themselves have turned out delightfully amusing and entertaining. Moreover, they seem to have learned from the mistakes of Godzilla. So it doesn't take 2 minutes until you can catch a first glimpse of Kong. And after about twenty more minutes of introducing the characters and setting up the mission, there's plenty of action to be seen, with not only Kong but also the many other creatures on the island mostly in bright daylight. So you get a lot for your eyes for your money. There one switches the brain then also gladly times on draught.

The effects are excellent for the most part. There are a few moments where it becomes all too obvious that they were shot in front of a green screen. But such scenes are, thankfully, the exception rather than the rule. In addition, Kong's fellow island dwellers are captivating with a pleasing originality that keeps the film's show value soaring - even when the occasional effect isn't perfectly executed. Kong himself is simply magnificent. The fact that he's much bigger than his predecessors makes sense, since he's supposed to compete against Godzilla. And that's why you need a monkey of considerable size, who could probably easily jump over the Empire State Building, if you had moved him from the island to New York like his predecessors. And if fighting other giant creatures gives you a slight inkling of what a later confrontation with Godzilla might look like, you're very glad the creators opted for that size.

While Kong is truly the king, the human characters remain pale throughout. True, Tom Hiddleston tries quite convincingly as an action hero, Oscar winner Brie Larson does her best to give her character a modicum of depth, and John C. Reilly proves to be the film's secret star with his performance. Still, there really isn't a character that lingers in the memory. But since the mysterious island and its inhabitants are the focus of the story and there are hardly any real character moments anyway, this shortcoming is ultimately tolerable.

Kong: Skull Island is nice popcorn entertainment with great show values and good fantasy action. Nothing more, but nothing less either. If there was just too little Godzilla in Godzilla, you'll get your money's worth monster-wise here. By the way, it's worth to stay seated until after the credits, because there's a very nice scene that doesn't show any creatures per se, but it reveals what kind of universe should be started with these first two movies and how much potential there is in it. If this is exploited as entertainingly as it was in the case of Kong: Skull Island, then fans can look forward to a few more very entertaining hours. Absolutely worth seeing!

Picture + Sound: As you would expect from a recent blockbuster, Kong: Skull Island is presented on Blu-ray in very good picture and sound quality. The picture impresses with a very high overall sharpness and an atmospheric color scheme that gives it a slight 60s feel. With the Dolby Atmos TruHD mix, there's a huge thump in the first few minutes and that doesn't change much later on. When Kong hits, the living room shakes. Dialogue and film music are well matched and sound well intelligible from the speakers. Very good!

Extras: In addition to a very informative and entertaining audio commentary by director Jordan Vogt-Roberts (no UT), the disc also has a two-part making of (total approx. 24:26 min.), as well as featurettes about the shooting in Vietnam (approx. 5:38 min.), the photos Brie Larson took on set (approx. 2:19 min.) and the shooting in Hawaii with Tom Hiddleston (approx. 6:53 min.). There are also unused scenes (approx. 3:45 min.) and top-secret Monarch files (approx. 7:56 min.). All quite nice to look at, but only conditionally informative. There certainly could have been more to it.

Conclusion: Kong: Skull Island is nice popcorn entertainment with great visuals and good fantasy action. Not a classic, but a film that absolutely serves its purpose and makes you want to see the upcoming Kong vs. Godzilla duel! The Blu-ray shows the film in very good picture and sound quality. The extras, true to the film, are good but not overwhelming. Overall, that's good enough for a: recommendable!