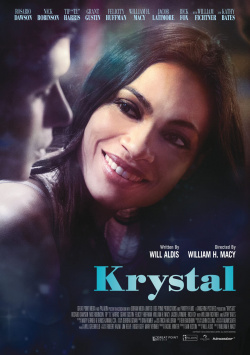 Taylor (Nick Robinson) is a quiet teenager. Wild parties or a girlfriend are foreign words to him. And there's a reason for that: Taylor suffers from a heart condition. If he gets too excited, he simply keels over, and there's a danger that he won't wake up at some point. But then Taylor meets Krystal (Rosario Dawson), a single mother with a troubled past. The clearly older woman makes Taylor's blood boil and he knows: To win Krystal over, he has to radically change his appearance. And so he tries to be a cool pickup - but will his weak heart go along with it?

That an Oscar-nominated actor doesn't automatically have to be a good director was proven by William H. Macey with the very shallow comedy Mister before Sister. Krystal isn't a masterpiece either - but it's a lot better than its predecessor. Here, at least, Macey manages to create some wonderful moments that are original and funny in their own right. He's also been able to assemble a good-humored ensemble around his two excellent leads, Nick Robinson (Love, Simon) and Rosario Dawson, including Oscar winner Kathy Bates, The Flash leading man Grant Gustin, and musician T.I. in addition to himself and his wife Felicity Huffman.

There are moments when the movie is simply beautiful or extremely funny. But just moments later, it becomes clear what the comedy is lacking. Macey just doesn't want to properly flesh out the individual elements of his story. For instance, some scenes are dragged out for so long that even when they were initially funny, they just get annoying. This also goes for running gags like the doctor played by William Fichtner. His first appearance is really funny, but by his second scene the air is already out. Other aspects, on the other hand, fizzle out and thus fail to live up to their potential.

Given the actually nice story, the great actors and the good moments, Krystal should actually work really well. However, as much as you want to like the movie, in the end you are left with the feeling that a lot of potential has been wasted here. Maybe the saying cobbler stick to your last really applies to William H. Macey. Because even if the whole thing has not become a total failure like Mister before Sister, so there is also here only a hesitant: With restrictions worth seeing!