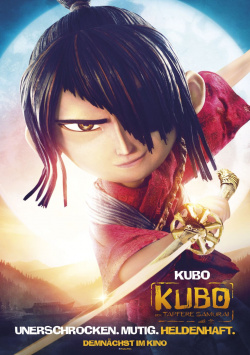 Little Kubo lives in a small Japanese coastal town where he sacrificially cares for his mother. The boy is only allowed to leave the cave where they live during the day. Because at night, his mother says, the evil spirits they have to hide from would find him immediately. And so Kubo spends his days as a storyteller in the marketplace of the small town, earning himself and his mother a little money to survive. But one day, the boy forgets the time and thus lures his mother's two evil sisters on his trail. They are the harbingers of a much greater danger, which Kubo can only face if he is in possession of a magic armor. Now he must embark on a perilous journey to find the three pieces of that armor. With the help of his new companions Monkey and Beetle, the boy faces all dangers - but whether this is enough to defeat the dark force he must face in the end is more than questionable.

Kubo - The Brave Samurai is the latest stroke of genius from animation studio LAIKA, who have already wowed audiences and critics alike with films such as Coraline and Paranorman. The studio's films may not be absolute blockbusters, but fortunately they earn enough money to ensure the production of further films. In elaborate stop-motion animation, the creators tell original stories that are usually told with a lot of humor, but also dark moments, giving them a character all their own. The LAIKA films are no smooth mass products, but very lovingly realized, very individual works, which not only older children, but also adults who are young at heart can enjoy. And that is once again the case with Kubo - The Brave Samurai.

To admit, the story itself is not among the best the studio has produced so far. But the realization is again so original, detailed and charming, that the very conventional story is enormously enhanced by it. However, it should be made quite clear that the search for the magic armor is by no means something for small children. There are plenty of scary moments that children under the age of 10 might have to chew on for a long time. Kubo's mother's demonic sisters are undoubtedly one of them. And the dark underwater world that the boy must dive down into to get a piece of the armor might also make for less than pleasant dreams for viewers who are too young. Certainly, overall Kubo - The Brave Samurai is a children's movie - just not for the very young.

The animation is simply perfect, and every second of the film is a testament to the great passion that everyone involved here has put into this imaginative adventure. The humor is mostly appropriate for children, but never falls flat, but rather pleasantly quirky. And the finale, though served with plenty of sugar-coating, never feels cheesy, just touching and beautiful. Kubo - The Brave Samurai is overall a small work of art that entertains well, offers a lot of suspense, but is also a lot of fun. An all-around successful animated film that more than deserves its Absolutely Worth Seeing!