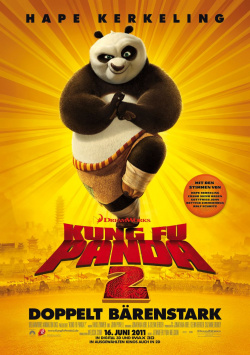 Panda Po is back and swinging his paws again. Preferably, of course, to carry such tasty food into his mouth. But also, of course, to protect the Valley of Peace together with the Furious Five. Now is the time for Master Shifu to teach Po his most important lesson. Only when the panda succeeds in finding his inner peace, he is a true Kung Fu master. But memories of his childhood always disturb his concentration. Before Shifu can finish the training, a new opponent appears, who wants to make himself subject to all China with a cruel weapon. Lord Shen, a wicked peacock, could destroy the tradition of Kung Fu forever with his explosive invention. And so Po and the Furiose Five go into a fight that takes them all to the limits of their ability and forces Po to face his true origins...

After the great success of part 1 in 2008 it was of course only a matter of time until "Kung Fu Panda 2" would see the light of the cinema screens. Jennifer Yuh Nelson, who worked as Head of Story for the first part and gives her debut as a feature film director with part 2, tries her best to satisfy the fans of the first part. The successful gags from the debut album are processed again in varied form, the action has been improved and the animations have also been refined. The result is good animation entertainment with a high show value. But unfortunately the sequel has lost much of the charm and lovable humour of the first part.

No question, "Kung Fu Panda 2" is funny. In some places even very, very funny. And Hape Kerkeling gives the character with his wonderful dubbing in the second film again a lot of charm. All in all, however, the action is too dominated by the action sequences, which at times are too dark and brutal for the very young viewer. This also means that many of the secondary figures, but especially the members of the Furiosen Five and the wonderful Master Shifu, come much too short. Especially the interactions between Po and Shifu provided many wonderful moments in the first part. Unfortunately there is far too little of it left in the second part.

It is nice, however, that the sequences in which Po seems to remember his origins are wonderfully old-fashioned animated and thus represent a clear contrast to the perfect computer animations. These scenes have a charm of their own, which is of great benefit to the movie as a whole. The same should be true for the 3D animation. But even if there are some nice and effective 3D effects here and there, "Kung Fu Panda 2" is one of those movies in which the three-dimensional effects are nothing more than a nice gimmick. Whether this is really necessary, especially as the senses of the little panda fans are already strained by the rapidly staged fighting sequences, is left to be seen. The fact is that the reunion with Po and his companions doesn't really gain much from an additional dimension and the extra charge at the box office is therefore only conditionally justified.

"Kung Fu Panda 2" offers good entertainment and proves that the adorable figure of the courageous panda can carry more than just a film. It's just disappointing that Po with all his martial arts can't fight the curse of a sequel and loses so much of the originality, the wit and the charm that made the first movie so worth seeing. However, what already disturbed only a few viewers with "Shrek" won't stop anyone from getting a ticket for Pos' fight against the knife throwing peacock Lord Shen. Those who lower their expectations will be well entertained in any case. Worth seeing - with or without 3D glasses!