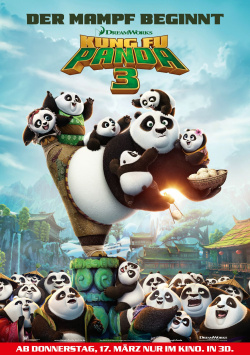 Panda Po (voiced by Hape Kerkeling), the master of Kung Fu, faces his greatest challenge when he is suddenly no longer supposed to be a student but a teacher of the Furious Five. But his very first attempt to teach the great fighters something new ends in disaster and Po is once again forced to doubt his abilities. But then something happens that makes him forget his failure completely for a short time: his biological father shows up and takes Po to a hidden panda refuge. Here he is no longer the outsider, but finally feels at home. But his luck doesn't last, because the powerful fighter Kai has escaped from the realm of the spirits to rob all the great Kung Fu masters of their chi and become the most powerful warrior in the world. And Po and his friends also have Kai in their sights. So once again, the brave Kung Fu Panda must follow his destiny to save his friends, his family and the whole world.

Eight years ago, the ever-hungry Panda Po first fought his way into the hearts of viewers. The endearing mix of comedy, adventure and fantasy, spiced with a touch of Asian folklore, somehow seemed fresh and unspent. Po, voiced in German by Hape Kerkeling almost better than in the original by Jack Black, is a character you just have to love. When he confronts his old nemesis - the stairs -, shows off his hopeless naivety or rises above himself at the decisive moment, you simply can't escape the charm of this cuddly panda. So it's no wonder that the great success of Part 1 was followed not only by a somewhat weaker sequel, but also by several specials and a TV series. And since audiences apparently haven't had enough of Po and his friends yet, Kung Fu Panda 3 is now coming to our cinemas.

No question, the third part has some very funny moments to offer, as well as some very watchable (3D) effects. But the film also makes it clear that the basic idea is exhausted and offers hardly any possibilities for new ideas. As a result, Pos' third big screen adventure has become an overloaded mixture of rehashed gags and bloated fight sequences. Little of the first installment's charm is left in the process. Sure, Po is still endearing and some of the images are really pretty to look at. But all in all, the magic of the first movie is almost completely gone. Even the many other funny pandas can hardly change that.

The tried and true formula of always having to kick it up a notch with a sequel already hurt part 2. But back then, the makers were still able to make up for a lot of that with enough original ideas and sizzling gags. That only works to a limited extent here. The film relies too much on its sometimes frighteningly flat gags and its visual gimmicks, which, despite all efforts, no longer seem as fresh and unspent as they might have eight years ago. And while Kai is an interesting character and a strong villain in his own right, the final confrontation somehow feels arguably powerless.

Is Kung Fu Panda 3 a bad movie because of these flaws? Not necessarily! For fans who didn't just really like the first part like I did, but also loved the sequel and enjoy watching the TV series, the third feature film offers enough wit and showmanship to guarantee an enjoyable afternoon at the movies. But if you're expecting more than the tried and true concept with a lot of rehashed ingredients and only a few new ones, you'll be only moderately entertained. And that's why the bottom line is only one: For very loyal fans absolutely, otherwise only with cutbacks worth seeing!