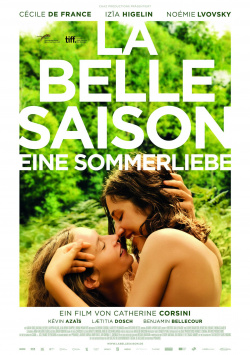 France in the 1970s: 23-year-old Delphine (Iz&iuml;a Higelin) feels trapped in a far-too-tight corset of narrow-mindedness and extremely conservative morals. Here, on her parents' farm, she cannot live out her desire for freedom and her love of women. To find happiness, she decides to go to Paris. Here she quickly succumbs to the charms of Carole (C&eacute;cile de France), an extroverted feminist. Although the latter is actually in a happy relationship with a man, Carole also begins to feel attracted to Delphine. A passionate love develops between the two, which seems to be exactly what Delphine has been longing for all these years. But when her father (Jean-Henri Comp&egrave;re) becomes seriously ill, she must go back to her parents' farm to stand by her mother (No&egrave;mie Lvovsky). When Carole decides to follow Delphine, the women begin not only a summer of passion, but also a severe test of their still-fresh love.

La Belle Saison tells a moving love story, which director Catherine Corsini has realized very sensitively and sensually. With two strong leading actresses, she shows how two very dissimilar women find each other, only to have to fight against societal and family pressures. Corsini perfectly captures the attitude towards life in the 1970s and shows the strong discrepancy between the moral standards in a city like Paris and the rural province. This also makes it easy to understand why Delphine feels trapped in her hometown and why she is so fascinated by a woman like Carole from the very first moment. After all, the young activist seems to embody everything Delphine would like to be. But at the same time, it also becomes clear that she is more affected by life in the country than she might have thought, and that sometimes she just can't get out of her skin. Carole does manage to free her from these shackles at times, though, and it's in these brief moments that you can tell Delphine is genuinely happy.

That these moments work is also due to the very uninhibited, absolutely not striking handling of nudity, through which the love scenes between the two women seem very authentic and not at all voyeuristic. It is this naturalness that makes this love story so believable and moving. The story could have used a few more dramatic climaxes, because especially in the middle part it's a little bit rippling. But on the other hand, the whole thing fits well with the supposedly idyllic summer atmosphere in which the two lovers feel so happy and safe - until reality catches up with them again. Still, don't expect much pacing here. Rather, one must be able to adjust to a gently rushing narrative flow in order to enjoy not only the beauty of the images, but also that of the story.

Towards the end, however, the staging becomes rather conventional and the end of the film is too reminiscent of a thematically similar French work from the recent past (even if program cinema lovers will immediately know which film we are talking about here, it should of course not be mentioned here). Nevertheless, even though there are a few lengths and the story offers few surprises after a strong beginning, the strong actresses and the sensitive staging are able to reach the hearts of their audience. This makes the romantic drama for fans of European arthouse cinema and stirring women's films also on balance: absolutely worth seeing!