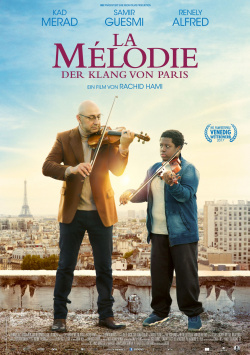 La Mélodie - The Sound of Paris

It's a real challenge for professional musician Simon Daoud (Kad Merad) when he is asked to teach a school class in a Paris suburb how to play the violin. The children from socially disadvantaged families have not only never held an instrument in their hands before. They also lack discipline and passion. Simon finds it difficult to convey this to the children. But when he discovers a real talent in young Arnold (R&eacute;nely Alfred), it helps him focus on the very big goal: A performance in the concert hall of the Paris Philharmonic. But there is still a long way to go before that happens.

Inspired by a social, musical-orchestral school project initiated by the Paris Philharmonic, director Rachid Hami's La M&eacute;lodie - The Sound of Paris is a beautiful urban fairy tale about the power of music. Kad Merad, known mainly from comedies such as Welcome to the Sh`tis, is convincing here in a very restrained role as a violin teacher who tries to teach the children discipline, but also friendship and cohesion with the help of music. Hami was very concerned with authenticity in the production. Thus, the child actors were cast in the district of Paris in which the story is also set. And only those children who had no previous experience of playing the violin were chosen.

Just like the students in the film, the actors were to gradually learn how to play the instrument, and their playing was to be so good at the end that they would be able to perform in the concert hall of the Paris Philharmonic. Particularly important in this was the casting of Arnold, who was inspired by a boy Hami had met in the Belleville district of Paris. In R&eacute;nely Alfred, he found the perfect young actor who, like his real-life role model, has an innate musical talent.

This approach to casting and staging pays off, as the audience can always tell if an actor is really playing his instrument, or just pretending. In addition, the children come across as very authentic, which lends the story a certain credibility despite its almost fairy-tale nature. La M&eacute;lodie - The Sound of Paris is a truly beautiful film that believes in the good in people and shows how music can transcend social, societal and cultural boundaries. A charming big city drama that more than deserves an absolutely worth seeing

Cinema trailer for the movie "La Mélodie - The Sound of Paris (Frankreich 2017)"
Loading the player ...