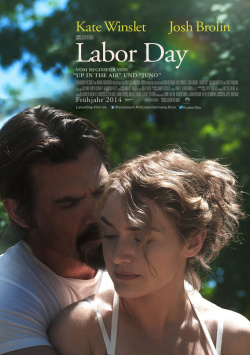 The summer of 1987 in New Hampshire: Here lives Adele Wheeler (Kate Winslet) with her 13-year-old son Henry (Gattlin Griffith). The separation from her husband has thrown Adele completely off track. She has withdrawn almost completely from society and rarely leaves the house. And that only when Henry accompanies her, cashes checks for her at the bank or does small purchases. On the day before Labor Day, the boy manages to persuade his withdrawn mother to make one of her rare shopping trips to the mall. There they encounter an injured Frank Chambers (Josh Brolin), who politely but forcefully asks the pair to help him. For Frank is an escaped convict who desperately needs a place to hide from the police for some time. Reluctantly, Adele takes him to her home. Although she fears for her life and that of her son, she is also fascinated by the stranger in a very special way. Over the course of the next few days, she rediscovers feelings she thought were lost and thus manages to slowly slip out of her cocoon. But Henry is rather sceptical about this change, especially as the situation now becomes more and more dangerous for all three of them.

Jason Reitman has moved more and more away from pure comedy since his surprise success Juno. Already the follow-up Up in the Air was, in addition to numerous amusing moments, also infused with a strong dose of melancholy, which has intensified many times over in Young Adult. With Labor Day, Reitman now presents his first film as a consistent continuation of this path, which completely dispenses with humor. Nevertheless, the drama based on the novel The Scent of Summer by Joyce Maynard is far less depressing than Young Adult was under its humorous surface.

More to the point, Reitman has directed a very tender, at times almost poetic love story that tells of two people who find each other under unusual circumstances and hope that together they can leave the shadows of their past behind and find their way to a shared, happy future. The special charm of the story is that it is told from the point of view of a teenager. Although Henry is beginning to take an interest in girls, he is still too much of a child at heart to fully understand what is happening between his mother and Frank. As a result, what develops between the two adults is mostly shown only in hints, based on glances or fleeting touches.

The film has very warm imagery that perfectly captures the deceptive idyll in the brief moments of happiness between Adele and Frank. The beautiful soundtrack that accompanies the action further intensifies this emotional impression. In this very successful setting, the strong actors are able to develop their acting very well. Kate Winslet and Josh Brolin not only succeed in making the delicate bonds that develop between their rather fractured characters believable. They also take enough of a back seat so that their young co-star Gattlin Griffith isn't pushed into the shadows, but can shine as the real leading man. Because Labor Day is not only a love story between Frank and Adele, but also a coming-of-age story. For the few days surrounding Labor Day 1987 represent a very drastic break in the boy's life, heralding the end of his childhood.

Labor Day is not for viewers who need a lot of pace to be well entertained. Reitman's production seeks its power in quiet. And that, unless one finds access to such sustained storytelling, could well come across as a bit tedious. But if you can get involved with the throttled narrative flow, you'll be treated to a quite enchanting, dramaturgically touching film with excellent acting. Great emotional cinema for all viewers who like American art house cinema of the quieter and more emotional kind. Absolutely worth seeing!