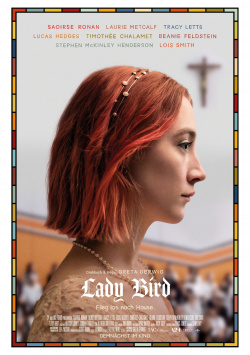 Christine Lady Bird McPherson (Saoirse Ronan) has had enough of her boring life. High school, the annoying family - Lady Bird has had enough of the routine. This is especially felt by her mother (Laurie Metcalf), with whom the 17-year-old regularly clashes. Lady Bird rebels at home where she can and tries everything to get accepted at a college as far away from her mother as possible. But this process of cutting the cord is more difficult than expected, as her mother is not yet ready to let her headstrong daughter go.

With Lady Bird, actress Greta Gerwig has also won the hearts of critics as a director. Her second directorial effort, for which she also wrote the screenplay, centers on a character of the sort Gerwig usually plays herself. Due to her age, she has left that to Saoirse Ronan, but the typical Gerwig style is clearly noticeable in the character of Lady Bird, not only on the outside, but also in Ronan's acting. While this isn't really a criticism, it is the case that Gerwig is in her absolute comfort zone here and therefore delivers little that is truly surprising. Her film is charming, funny, occasionally very clever and, except for the last completely unnecessary 5 minutes, really worth watching. However, the many awards and nominations the film has received are not quite understandable. There is simply too little for that, what makes it stand out from the mass of similar US indie productions.

Now that that's been said, I might as well join the usual chorus of praise that accompanies the film. For despite minor deductions of points in the B grade, Lady Bird has become a very charming coming-of-age story, atmospherically filmed and very well acted. Especially the at times overflowing squabbles between mother and daughter are very amusing, but at the same time have an emotional component that seems very authentic and quite moving. Here, but also in Lady Bird's relationship with boys, it becomes clear that behind her strong, somewhat detached demeanor, she is nevertheless a normal, vulnerable teenage girl desperately seeking her place in life - and just lashing out verbally at times.

A film about the pitfalls of growing up, about family and friendship - and all that (almost) without kitsch and pathos, but with well-written dialogues and engagingly acting actresses. If you like American independent cinema, you're guaranteed to love Lady Bird. The fact that at the end you still have the feeling that it all seems very familiar somehow, dims the entertainment value only marginally. For this there is clearly one: Absolutely worth seeing!