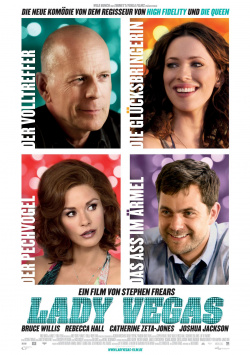 Stephen Frears, director of such wonderful films as The Queen, High Fidelity, Dangerous Liaisons and most recently Always Drama for Tamara, ventures into the world of Las Vegas betting shops for his latest work. Based on true events that Beth Raymer adapted into her autobiographical book Lay the Favorite, the comedy tells the story of country bumpkin Beth (Rebecca Hall), who quits her job as a stripper in Florida and comes to the gambling capital of Las Vegas with one big dream: to become a waitress in a fancy cocktail bar. But while that dream doesn't come true, Beth seems to have hit the jackpot quickly: she lands a job with professional gambler Dink (Bruce Willis), who sees Beth's excellent memory for numbers as a real asset to his betting shop. Soon Beth is firmly part of the city's sports betting milieu, but like most people in Vegas, her luck doesn't last. Because when Dink's jealous wife Tulip (Catherine Zeta-Jones) fears something is going on between her husband and his newest employee, she puts her foot down and Beth is back on the street. However, Beth doesn't give up that easily. She heads to New York with the charming Jeremy (Joshua Jackson), where she starts working for Dink's competitor Rosie (Vince Vaughn). Not a good idea, as it soon turns out...

Lady Vegas scores particularly well with its cast and the characters they portray. Rebecca Hall, known from films like Frost/Nixon or Woody Allen's Vicky Cristina Barcelona, is simply adorable as the fun-loving Beth, who is highly intelligent but extremely naive at the same time. It may be that her somewhat over-the-top nature can easily get on the nerves of some viewers, but especially compared to her other roles, Hall offers a very refreshingly different performance here that she clearly enjoyed. Also Bruce Willis, who has been rather reduced to smallest supporting roles in the last two years, finally gets to show some more of his comedic talent here as the actually good-natured but neurosis-ridden Dink. And Catherine Zeta-Jones finally delights with a quite self-deprecating role, which undergoes a surprising transformation in the course of the film.

The other actors, whether Vince Vaughn, Laura Prepon (The Wild Seventies) or Fringe star Joshua Jackson, come next to a little too short, but also leave all a very positive impression. However, the same can only be said about the script to a limited extent. D.V. DeVincentis, who already worked with Frears on High Fidelity, obviously tried to pack as many aspects of the book as possible into the story. The mixture of sometimes comedic, sometimes dramatic aspects doesn't always work, but it's not the actual shortcoming of the film. This is rather the completely overloaded beginning, which leaves the viewer long in the dark about what the film now actually wants to tell him.

The introduction to the world of professional sports betting may have worked on paper. But for viewers completely unfamiliar with the subject matter, the whole thing in the film is probably bohemian villages by the end. Since all the helpful information is packed into a few quickly cranked down dialogues at the beginning of the film, too much is left unclear to follow the action more than superficially. And that's exactly the impression that lasts until the end: the whole thing is nice, but just very superficial. It's fun to watch the well-performed ensemble, but a lasting impression just doesn't want to set in. And that's a damn shame, given the potential that shines through again and again.

If DeVincentis had found a different way to work the not unimportant background into the turbulent story in a comprehensible way, and if Frears had chosen a somewhat clearer tone for his staging, Lady Vegas could have been quite a wonderful cinematic treat. As it is, however, it's still not a bad film, but it's just not much more than a rather light, not exactly memorable comedy that falls far short of its potential. Not mind-blowing, but still just worth seeing!