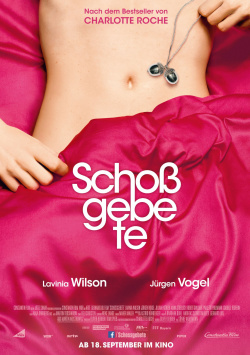 The planned wedding on Sylt turned into the worst event in Elizabeth Kiehl's (Lavinia Wilson) life. When her mother and siblings are involved in a horrific accident on the way to the wedding, killing the children, the young woman's life is completely derailed. Years later, she lives a seemingly happy life with a new husband (Jürgen Vogel) and her daughter Liza (Pauletta Pollmann) in a smart family home. But her everyday life is dominated by fears and spleens, which she tries to cope with through constant therapy sessions with Frau Drescher (Juliane Köhler). Somewhere between raising children, worming and visiting brothels with Georg, she tries to get her thoughts of revenge, guilt and phobias under control. But to do that, she would first have to face her traumatic loss.

Schoßgebete is the second big-screen adaptation of a novel by Charlotte Roche, following the huge success of Feuchtgebiete. Craft-wise, director Sönke Wortmann has delivered a very good film that thoroughly makes you forget his lousy comedy The Wedding Video. The actors are also beyond reproach, with Lavinia Wilson in particular proving once again that she is one of the best German actresses of her generation. Her acting is intense and stirring, multi-faceted and very emotional. At the same time, Wilson manages the feat of making Elizabeth, despite her many quirks and her not exactly unstrenuous behavior, a truly sympathetic figure whose fate really moves you as an audience member. But also Jürgen Vogel delivers a very good performance as her emotionally very balanced counterpart.

The provocation-oriented obscenities, with which Wetlands has thrown around almost every second, under which too much of the story was buried, are kept here within tolerable limits, even if not completely renounced (Show me your butt hole?). The dramaturgy is built up quite rousingly and shows a clear structure much more clearly than the book template. These are all points that speak for the fact that Lap Prayers has become a really worth seeing movie and a successful adaptation of the novel. And yet, the whole thing has a somewhat strange aftertaste.

I pondered for a long time why I often felt very uncomfortable during the film. Ultimately, I was able to pinpoint it to an understandable tirade of hatred from Elizabeth towards the tabloids, who immediately pounced on the horrific accident with tremendous sensationalism, thus depriving the bereaved of a very personal moment. It's a very passionate moment, full of anger and sadness. Actually one of the most powerful scenes in the film. What hit me in the stomach was the fact that the story of Schoßgebete has many biographical references to the life of Charlotte Roche and that she deals with the tragic accidental death of her brother and two of her stepbrothers in 2001. The fact that she shares this with the public, so to speak, may be an important therapy for her. But precisely because this is such a horrific and so personal moment, as a viewer here you almost feel like one of the voyeurs Elizabeth is rightly attacking.

Naturally, it is something entirely different whether the tabloids cannibalize such a tragedy for circulation gain or whether a victim(s) goes public with his or her story. Nevertheless, a somewhat ambivalent feeling remains, especially with such a commercial route. This doesn't change the fact that Lap Prayers as a tragicomedy is quite convincing and can be called a really good film and a passionate plea for life for long stretches. As a viewer you can laugh, but you also get deeply moved. The fact that some scenes seem a bit forced and a little bit striking can be forgiven. If you liked the book, you will certainly like the film version, if only because of the great leading actress. And for that there is also a satisfied: with small restrictions worth seeing!