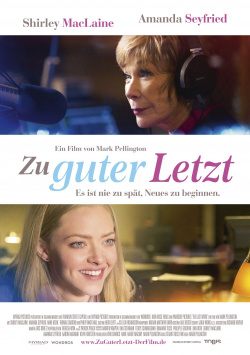 Last but not least

When you don't do everything yourself! For Harriet Lauler (Shirley MacLaine), a successful retired businesswoman, something is only good if she takes care of it herself. She may not have made many friends with this on her often rocky road through life, but at least she can look back on an extremely successful career. But instead of enjoying her twilight years, Harriet also wants her demise to be perfectly organised. And that includes a suitable obituary. The young journalist Anne (Amanda Seyfried) is supposed to write it for her while she is still among the living. For Anne, this bizarre assignment proves to be extremely difficult. Not only that she can't stand Harriet's bossy manner. She also can't find anyone who could tell her something good about the woman. And so the two unequal women have no choice but to join forces to work out a strategy for Harriet to rewrite her biography in the last few metres of her life's journey.

Last but not least is in itself an ehr predictable film. Already after a few moments you suspect very well how the story will end. And indeed, director Mark Pellington follows a very clear pattern that many filmmakers before him have used. But maybe apart from the last five minutes this is hardly disturbing. For one thing, he manages to give the characters a surprising depth, which gives the story some rough edges that similar works often lack. For another, the script offers some very zippy dialogue, which significantly increases the entertainment value of the film.

And then, of course, there's the great lead actress. Granted, Shirley MacLaine has played very similar characters many a time in the past. One can't help but feel that she is somehow playing herself over and over again. But she does it so well that it's just always a great pleasure - as it is here. Why her performance works so well may also be due to the fact that Amanda Seyfried's character is very well written and that she, as a young, disillusioned journalist, is able to stand up to the old hag - and thus gain her respect. A friendship of sorts develops between the two women, which MacLaine and Seyfried convey very believably to the screen.

The ending is unfortunately all too conventional and predictable and also takes away some of the very positive impact of the preceding scenes. But even though the last scenes are among the weakest moments of the film, in the end you are left with a very positive overall impression. Last but not least is a really nice comedy with two very interesting main characters, played by two convincing actresses (although newcomer Annjewel Lee Dixon shouldn't be forgotten either), who manage to pull some surprising and refreshing moments out of a very predictable story. For this there is in the end a clear: Worth seeing!