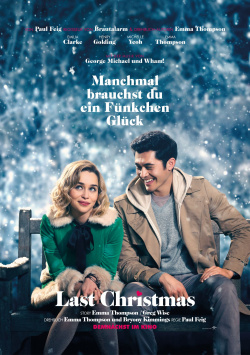 All of London seems to be in Christmas fever. Kate (Emilia Clarke) should be feeling extra special right about now, working as an angel in a Christmas shop. But Kate's life is an absolute mess. Since a serious illness a year ago, she has not only lost her special singing talent, but apparently also the desire to live. And so wherever she goes, she leaves nothing but trouble in her wake. But then charming Tom (Henry Golding) enters her life and actually seems to manage to get through to Kate with his disarming manner. Slowly, the young woman finds joy in her existence again and in sharing that joy with others. But it also becomes clear that Tom is carrying a secret - a secret that could quickly destroy Kate's newfound happiness if she fails to simply believe in herself.

It's been impossible to imagine the holiday season without Last Christmas for 35 years. George Michael has created a real classic with this Wham! hit. In Germany alone, the song has remained in the charts for over 130 weeks. Already ten years ago the idea came up to make a movie out of the song. George Michael himself was quite taken with it, but made the condition that Emma Thompson should be involved in the development. In fact, the actress and screenwriter liked the idea and worked out a concept in consultation with the singer, which she was to turn into a screenplay. However, after George Michael's sudden death, the project stalled and it looked like it would never be made.

However, Michael's friend and manager David Austin lobbied for the film to become a reality after all. And so now, directed by Paul Feig, a charming Christmas comedy is coming to our cinemas that pays tribute not only to the titular song, but to George Michael's entire musical output. Yes, it's cheesy. Yes, it's full of clichés. And yes, the big twist should be obvious to many long before the reveal. But the film is also simply beautiful, it's fun, and it gets to the heart. And that's exactly why it's an (almost) perfect Christmas movie.

The main character has the makings of being a real pain in the ass. But Emilia Clarke manages to make this character so endearing and charming that you just can't blame Kate for her chaotic nature and character flaws. Henry Golding's good-humored acting fits it perfectly, and it's very easy to understand why Kate falls for his engaging nature so easily.

A beautiful story, great music (including a new George Michael song in the credits), and quite a bit of heart-warming Christmas kitsch - yes, Last Christmas almost deserved to be called a worthy successor to Actually.Love. But even if that doesn't quite apply to the bottom line, the film is simply a nice piece of feel-good cinema for all hopeless romantics. And for those who feel addressed there, this conclusion also applies: Absolutely worth seeing!

Another tip: Keep your eyes open in the last scene, there is a very nice guest appearance for all WHAM! fans to discover!