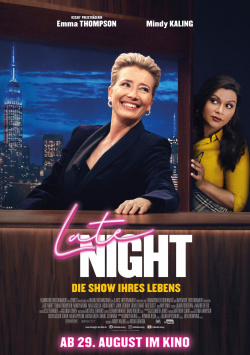 Late Night - The Show of a Lifetime

Working for talk show legend Katherine Newbury (Emma Thompson) is a real dream come true for up-and-coming writer-turned-comedian Molly (Mindy Kaling). But it soon turns out to be a real nightmare. Not only is there only men on the writing team of the show Tonight with Katherine Newbury. On top of that, Molly's idol also turns out to be a less than friendly person. On top of that, the show is struggling to survive in the face of falling ratings. But that's where Molly proves to be a real stroke of luck for the late-night show: With an iron will and good ideas, she manages to gain Katherine's respect and give the show a new lease of life. But the joy of this is short-lived.

Together with Mindy Kaling, who in addition to starring also scrubs and produces, director Nisha Ganatra has staged Late Night, an entertaining The Devil Wears Prada variation that deals with injustices women face in the working world on a daily basis with a lot of heart and humor. Featuring a great Emma Thompson, who is especially on top form in her interactions with Mindy Kaling, the film succeeds very well in spreading its message in a witty, backhanded and very entertaining way. At least until the last two minutes.

These poke a little sourly at the viewer because it lashes out at a (supposedly) perfect world of political correctness with an idealistic sledgehammer. It may be well-intentioned, but it comes across as far too heavy-handed, too intrusive and almost vomitously cheesy. Yes, it's only the final shot, but it does leave a bit of a bland aftertaste. Until then, however, Late Night provides excellent entertainment, marred only occasionally by the fact that the story isn't exactly a prime example of originality.

But the film makes up for that with its wonderfully drawn protagonists, Molly and Katherine. These two characters carry the film with pleasant ease, even over the slightly flatter moments. Late Night has a few of these, but in the end they weigh far less heavily than the many successful moments. So, in the end, clever dialogue, cryptic gags and great lead actresses ensure that this comedy, despite its flaws, has earned an Absolutely Worth Seeing!

Cinema trailer for the movie "Late Night - The Show of a Lifetime (USA 2019)"
Loading the player ...