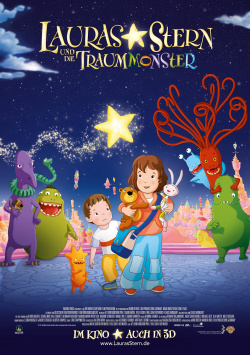 Laura's Star and the Dream Monsters

Laura and her star are back! The third film, based on the popular books by Klaus Baumgart, tells of the search for Laura's little brother Tommy's protect-me dog. Supposedly dream monsters have stolen him. At first Laura doesn't believe her brother, knowing that Tommy is extremely afraid of the dark. But it soon turns out that her brother is right. Since Tommy isn't quite as scared of the monsters as he used to be, it robs them of their power and they shrink. To lure Tommy into the land of dreams and really scare him, they stole his protect-me dog. With the help of Laura's Star, the girl and her brother plan to get the dog back. But the dream monsters don't want to admit defeat that easily. Since they fear nothing more than light, they do everything to catch the star.

Laura's Star and the Dream Monsters is a nice children's film that entertains, but doesn't overwhelm, very young viewers with both its imagery and running length. The dream monsters, which have been dubbed by comedians such as Oliver Kalkofe, Markus Maria Profitlich, Ralf Schmitz or Maddin Schneider, are indeed a very little scary for the little ones, but it comes even in the scenes in which they appear, again and again to enough funny, encouraging moments that prevent children could really get scared.

The 3D effect is also used very well. Although it is in itself questionable why now even the very young moviegoers must be confronted with this technology, since they perceive this very special sensory perception yet more intense than older viewers. But it has to be credited to the makers that they used the 3D effects very discreetly. So children will have a lot of fun with colorful balls or some pretty incursions in the land of dreams, but are not beaten to death by the effects at any moment.

Surely, the story is already arg pedagogical, but the moral is child-friendly, sometimes funny, then again very exciting packaged, that this does not turn out quite as penetrating, as in some other children's film. Therefore: if you want to introduce your little ones slowly to the experience of cinema, Laura's Star and the Dream Monsters can be recommended with a clear conscience! Absolutely recommendable for children between 4 and 6

Cinema trailer for the movie "Laura's Star and the Dream Monsters (Deutschland 2011)"
Loading the player ...