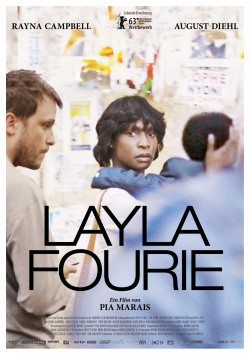 As a black single mother in Johannesburg, Layla Fourie (Rayna Campbell) doesn't have it easy. Every day is a new struggle to provide Kane (Rapule Hendricks) with an orderly life and keep him from slipping into crime. A new job could make that struggle a lot easier for Layla. For a big company, she's to conduct lie detector tests. Her first assignment takes her to a large casino complex, but it's many hours away. With nowhere to put Kane, she has to take her son with her willy-nilly - not a good way to start such an important job. Driving through the night, Layla causes a tragic accident in which a man is seriously injured. At first she tries to help him and drive him to the hospital. But by the time she gets there, it's too late - the man has died. In her panic, Layla decides to cover up the accident and make the strange man's body disappear. She must convince her young son to keep what he saw to himself. So she builds a framework of lies that is on very shaky ground from the start. But when she meets Eugene Piennar (August Diehl), the son of the accident victim, at the casino, she is in danger of being finally crushed by her guilt.

Layla Fourie is a very quietly told drama about guilt and atonement, in which a truth-loving woman entangles herself in a web of lies. Whether out of sheer panic or fear of no longer being able to care for her son is irrelevant. After her decision to cover up the death of the man she was responsible for, Layla can't help but spin this lie further and further, pulling herself deeper and deeper into the abyss. Every decision she makes from then on seems to be influenced by this lie, so it's never really clear how she really feels about Eugene, or whether her real fear is more about her own fate or that of her son.

Torn between truth and lies, between guilt and hope, Layla must keep up appearances on the outside - and it's nearly impossible. Rayna Campbell embodies this character and her inner struggle quite magnificently, from which the very wornly staged South African-German-French-Dutch co-production also clearly benefits. Campbell's play pulls the viewer in its spell, which then also over some lengths consoles - provided there is anyway a weakness for something bulky told arthouse cinema.

On Campbell's side also deliver August Diehl and especially the small Rapule Hendricks very good performances. This coupled with the interesting and in itself also exciting subject matter of the story makes Layla Fourie well worth watching, although the potential entertainment value is repeatedly diminished by the melancholy and very plodding production. If you don't mind that and appreciate program cinema fare of the somewhat duller kind, this drama is still well worth watching!