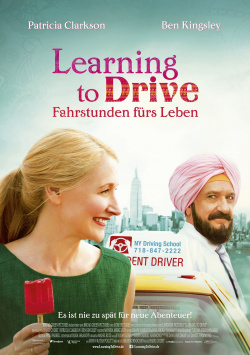 New York literary critic Wendy (Patricia Clarkson) is convinced she has both feet firmly planted in life. She has a steady income, lives in a nice apartment and has been happily married to Ted (Jake Weber) for 21 years. That he is now leaving her for a younger woman is something Wendy just didn't see coming. But that she now passes in mourning, Wendy does not want to grant this triumph to her faithless hubby. In order to be able to visit her daughter Tasha (Grace Gummer) in Vermont, she decides to finally get her driver's license. She enlists the help of Indian cab driver Darwan (Ben Kingsley), who has inadvertently witnessed the end of Wendy and Ted's marriage. His calm, level-headed manner makes Wendy see many things in her life with completely new eyes. And so an unexpected friendship develops between the disparate people during their driving lessons together, revealing to both of them what really matters in life. And Darwan can use this insight just as much as Wendy...

Director Isabel Coixet is not exactly known for directing light cinema fare. My Life Without Me or Elegy or The Art of Loving can certainly be considered entertainment films, but prove difficult to access especially for audiences used to more mainstream fare. After Coixet's attempt to direct a supernatural thriller (Another me) failed to generate much enthusiasm, she now ventures into a real feel-good film with Learning to Drive. However, she skillfully avoids drifting into overly shallow waters. Her film is light on its feet and profound at the same time - making it a real little gem in the arthouse cinema line-up.

The characters are very lovingly drawn and wonderfully brought to life by Patricia Clarkson and Ben Kingsley. At the same time, the actors as well as the script and staging skilfully avoid all threatening cliché cliffs again and again. Especially taxi driver and driving instructor Darwan could have quickly become an overdrawn cliché. But both Kingsley and Coixet know how to avoid that perfectly. Also well done is the way in which both storylines - Wendy's and Darwan's - run alongside each other, only to be skilfully linked together in the scenes they share. Thus, in the course of the film, it becomes very easy to understand what influence the shared moments have on the lives of both.

Apart from a few minimal lengths, Learning to Drive is an extremely entertaining pleasure that encourages you to break out of all too fixed habits and to look at life from different perspectives for a change. Because it's precisely the unexpected that sometimes provides the best surprises. And since you leave the cinema with this message in your heart and a smile on your face, there is also a very clear: worth seeing!

Cinema trailer for the movie "Learning to Drive - Driving Lessons for Life (USA 2014)"
Loading the player ...