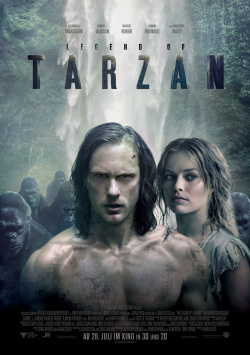 For several years now, John Clayton, Lord Greystoke (Alexander Skarsg&aring;rd) has been living in London with his wife Jane (Margot Robbie). Long gone are the days when he lived as Tarzan in the jungles of the Congo, far from civilization. But then John is commissioned by Parliament to return to his old homeland as a special ambassador. Accompanied by activist George Washington Williams (Samuel L. Jackson), he is to negotiate important trade issues. But John is reluctant to return to the Congo, certainly not with Jane. The situation in the country is too dangerous and some people still have a score to settle with Tarzan. But Jane does not let herself be deterred from accompanying her husband on this important journey. And so the three set out, unaware that they are merely pawns in a perfidious plan by ruthless Belgian Leon Rom (Christoph Waltz), who is willing to hand Tarzan over to his greatest adversary in order to achieve his goals.

With Legend of Tarzan, director David Yates (Harry Potter) delivers a very classic adventure film that attempts to wring a few new sides out of the familiar story surrounding the popular novel and movie hero Tarzan. The script aims to do this by combining fictional and historical elements. While Tarzan and Jane are only inventions of the writer Edgar Rice Burroughs, George Washington Williams and Leon Rom actually existed. Rom, a high-ranking Belgian officer, is believed to have been heavily involved in the Congo Riots under the leadership of King Leopold II, as is implied in the film. It makes the story quite interesting that it is set in a historical context. However, the harrowing true background is heavily toned down to ensure the film's mass appeal and not put off audiences.

The familiar Tarzan story is only touched upon in flashbacks. We see young John Clayton losing his parents and being raised by apes, meeting and falling in love with Jane, and ultimately the event that caused him to actually want to stay away from the Congo forever. But these parts of the story play only a minor role. The fight against the sinister machinations of Leon Rome takes center stage, with relatively few surprises. The mixture of fact and fiction has been made into a very conventional adventure story. This can entertain well, but nothing more. Neither the actors, nor the admittedly very good action sequences settle permanently in the memory of the audience.

Alexander Skarsg&aring;rd is at least physically absolutely convincing as a jungle hero, whereas his acting talent is less challenged. Christoph Waltz again plays the very role that opened all doors for him in Hollywood, and Samuel L. Jackson, as Tarzan's sidekick, provides a touch of cool and some amusing moments that keep the whole thing from taking itself too seriously. That's a good thing, because in the moments where it fails to do so, some unintentional comedy does crop up, which gets in the way of the overall positive impression a bit.

Overall, Legend of Tarzan is one of those movies in the can't-miss category: great pictures, good action, an attractive on-screen couple, and a whole lot of classic adventure romance. This is not new and not really groundbreaking staged. For an entertaining evening at the cinema, however, this is perfectly sufficient and therefore, despite some justified criticisms, there is a clear: worth seeing!

Cinema trailer for the movie "Legend of Tarzan (USA 2016)"
Loading the player ...