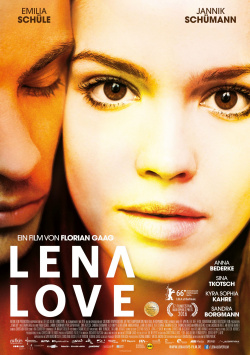 16-year-old Lena (Emilia Schüle) is pretty, talented, but a loner. Her one-time best friend Nicole (Kyra Sophia Kahre) prefers to date the popular but conniving Stella (Sina Tkotsch), who does everything she can to ensure that Lena and Nicole's friendship breaks down for good. When Lena falls in love with new classmate Tim (Jannik Schümann), but then gets hit on by Nicole of all people at a party, Stella seems to have achieved her goal: Lena breaks off contact with Nicole and destroys a chore she was supposed to do for her. As a result, Nicole is left behind, which she blames on Lena. When by chance they get hold of the access data for the fake profile of a certain Noah, with whom Lena has exchanged very open and intense chats, the girls plan a nasty attack that is supposed to completely expose Lena on the net. But what consequences this action will actually have, the friends do not suspect.

With his latest film LenaLove, acclaimed director Florian Gaag (Wholetrain) tackles the very topical subject of cyberbullying. He shows very well how close the positive and negative aspects of the internet are. The net literally opens the door to the world for people. If you feel completely alone, you can find real friends here who will catch you - or fall for a false identity. And what consequences this can have, the protagonist in this youth drama must experience in a particularly terrible way. This is atmospherically staged and very well played especially by Emilia Schüle.

The whole thing becomes particularly stirring when it becomes clear what destructive power social networks can have. A short video uploaded is enough to expose a person and drive them into social isolation. What effects this can have on the psyche, especially of a young person, is something that very few people think about. LenaLove tries to address the problem of careless use of social media without coming across as too doctrinaire. Rather, the whole thing is lightened up a bit by a love story.

Although the topic is important and the production has some good moments, LenaLove often falls short of its potential. For example, many of the characters are quite one-dimensional stereotypes and the dramaturgical structure uses a lot of clichés. The finale then doesn't dare to be really consistent. Thus, the good message of the movie is diluted a bit and the movie is pushed too much on the conventional track. It's a pity, because the topic could have used a more radical realization. Nevertheless: for young viewers the film offers a decent entertainment value, a good soundtrack and convincing actors in an interesting story. And for that there is then despite all justified criticisms also a neat: Worth seeing!

Cinema trailer for the movie "LenaLove (Deutschland 2016)"
Loading the player ...