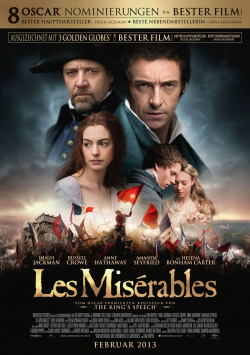 Over 60 million audiences have seen the musical adaptation of Victor Hugo's novel Les Mis&eacute;rables (The Wretched) on stages in over forty countries to date. The stage musical by Alain Boublil and Claude-Michel Schönberg, which premiered in 1985, is one of the longest-running and most popular musicals of all time. So a film version was really only a matter of time. Although Hugo's novel has been adapted to film several times and there were plans for an adaptation of the musical version years ago, the project was on hold for a long time. Now Oscar-winner Tom Hooper (The King`s Speech) has taken on the popular material and conjured from it truly opulent cinema, which should at least fans of the stage musical in rapture.

Les Mis&eacute;rables begins in 1815 and tells the story of convict Jean Valjean (Hugh Jackman), who, after 19 years in a penitentiary, is released to freedom by ruthless warden Javert (Russell Crowe) - with the promise of immediate return to chains should he even slightly violate the terms of his parole. Realizing that as a convicted felon he can no longer gain a foothold in society, Valjean goes into hiding and begins a new life as Monsieur Madeleine. Years later, he has made it to respected factory owner and mayor, but his past catches up with him once again. After Valjean makes a deathbed promise to fallen factory worker Fantine (Anne Hathaway) to take care of her daughter Cosette, he and the girl manage to flee to Paris from his pursuer Javert. There he lives in hiding for years, raising Cosette (Amanda Seyfried) into a young woman. When riots break out in Paris in 1832, the city threatens to descend into chaos. And in this turmoil, Valjean once again encounters his old adversary Javert, who wants to apprehend the fugitive once and for all.

Les Mis&eacute;rables is a story about love, suffering, the call for freedom and justice, about guilt and redemption. Great emotional cinema in fact, which leaves an extremely strong impression on its visual level. The sets, built on locations in France and England, are truly spectacular and immerse the viewer in the action. The acting performances are also undeniably top notch across the board. True, Amanda Seyfried is reduced a bit too much to her big doe eyes and Helena Bonham Carter plays more or less only a slight variation of her character from Sweeney Todd. But the performances of the rest of the cast, most notably Hugh Jackman, Anne Hathaway, and musical actress Samantha Barks, are strong enough to easily iron out such minor weaknesses.

On the other hand, the problem the film really struggles with is, of all things, its music. The singing skills of some of the actors can certainly be argued about. But for the fact that all actors sang their parts live in front of the camera and not in the studio, they deserve a lot of respect. Nevertheless: what works really well on stage, sometimes seems a bit strange in the movie. Since there is really hardly any dialogue and the characters constantly sing to each other in a not always melodious manner, it is difficult for untrained viewers to build up a bond with the characters and let themselves be carried away by their fate. Hooper seems to have seen it that way, too, as he tries to counteract this shortcoming with numerous very extreme and long-lasting close-ups of his actors. When Anne Hathaway, for example, sobs the wonderful I Dreamed a Dream into the camera as a pure song of suffering in a single long take, the emotions are already very drastically drilled into the viewer. Even Eponine's (Samantha Barks) heartbreaking On my Own, as beautiful as the song is and as poignantly as Barks performs it, is not exactly a lesson in subtlety. At moments like this, Hooper's staging feels a little manipulative and too thickly applied, which further detracts from the overall positive impression.

However, the feeling that the constant singing is at times arguably exhausting and doesn't really work is really only likely to resonate with those audience members who are new to the musical and are more likely to expect catchy tunes throughout. Fans of the stage version, on the other hand, will not be bothered by this. The only negative aspect is the decision of the German distributor to dub the few spoken dialogues, which doesn't really make sense, since most of the film is subtitled anyway. Especially in those moments where two words of German are suddenly spoken during a song, the whole thing takes on truly ridiculous and disturbing proportions. A continuous subtitling would have guaranteed not to dampen the joy of fans of the musical adaptation.

Who knows and loves Les Mis&eacute;rables, should not miss this version, if only because of the great sets and the fantastic equipment. But if you don't know the musical yet and therefore don't know what to expect, you should definitely listen to some of the lesser known pieces just because of the considerable running time to test if almost three hours of it might not be too much of a good thing. And so the bottom line is: even if here once again it becomes clear that stage material can not be easily transferred for the cinema, Les Mis&eacute;rables can be absolutely recommended at least fans of the musical!