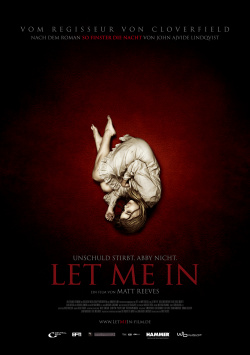 With his novel So Dark the Night, Swedish author John Ajvide Lindqvist was able to draw some fresh blood from the currently somewhat overused vampire genre. The film adaptation of the same name by Tomas Alfredson, for which Lindqvist wrote the screenplay, was so successful in 2008 that US studios soon became interested in the material. Cloverfield director Matt Reeves directed Let me in, a remake of the Swedish film that on the one hand has become a very faithful adaptation of So Dark the Night, but on the other hand also strikes its own tone and has earned its right to exist with a thrilling production and great actors.

1983: Twelve-year-old Owen (Kodi Smit-McPhee) lives with his mother in a barren small town in the middle of the mountains of New Mexico. The loner is regularly humiliated and tormented by some of his classmates. But he can't confide in his mother, and he has no friends. But that changes when Abby (Chloe Moretz) moves into Owen's neighborhood. The girl seems to feel just as lost in the world as Owen does, and so the two strike up an unlikely friendship. When some brutal murders rock the small town, Owen begins to suspect that Abby and her father (Richard Jenkins) might have something to do with it. But the boy doesn't suspect their true secret then...

Let me in is an atmospheric horror drama that works on several levels at once. First, there's the aesthetic level. Cinematography and set design, combined with music by Michael Giacchino (Lost), create a dark atmosphere that blends realistic and fantastical elements into an engaging whole. Furthermore, there is the acting and here too the remake can convince. With Kodi Smit-McPhee (The Road) and Chloe Moretz (Kick-Ass), two top-notch young stars were hired to carry this film almost entirely on their own. While other actors such as Richard Jenkins and Elias Koteas are more than convincing, without the great interplay between the two kids, Let Me In simply wouldn't work. Even if Chloe Moretz's acting seems a bit forcedly mysterious, especially at the beginning, the bottom line is that the acting performances can hardly be exposed.

And finally, there is the level of content. Like Alfredson before him, Reeves is very successful at making the story seem like a dark horror film on the surface, but underneath it reveals itself to be a very tender drama about friendship and the painful journey of growing up. While this adaptation also leaves out some important aspects about Abby's past, Reeves still focuses a bit more on the friendship between the boy and the vampire girl than Alfredson's version had. Other residents of the housing estate where Owen lives, as well as his father, don't really play a role in this version. Instead, the humiliating and brutal attacks of Owen's classmates against the boy are a bit more explicit and intense. Owen's rage, his despair and the feeling of being completely alone is definitely even more comprehensible and believable implemented here.

Let me in is one of the rare cases in which the remake is equal to the original in many moments, only weaker in a few points and in some respects can even be called better. A film that offers supernatural and very real horror in an atmospheric dense production with great actors. There is of course only one recommendation: absolutely worth seeing!