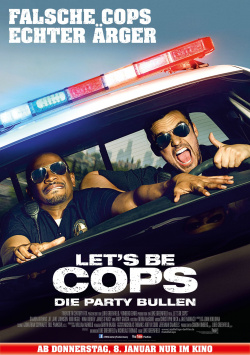 Let`s be Cops - The Party Cops

Justin Miller (Damon Wayans Jr.) and Ryan O`Malley (Jake Johnson) have been best friends since their school days. But alas, nothing has come of the big dreams they once had. While Justin suffers as a developer of video games from the fact that his boss has no interest in the idea of an absolutely realistic cop game, the former football hopeful Ryan bumbles through everyday life without a firm plan for the future. When they attend a party together in police uniforms, which they think is a costume party, their bleak existence brightens abruptly. Because the buddies are actually mistaken for real cops. And that comes with some perks: women give them hot looks, they're handed free drinks, and bad guys suddenly pay them respect. While Justin really only wants to join in the fun for one night, Ryan really gets into his new role. And so it doesn't take long until the two friends are in deep trouble and suddenly have to deal with real criminals. And that's no fun at all anymore.

The basic idea behind Let`s be Cops - The Party Cops is really very amusing. Staging a classic buddy-cop comedy with all the usual clichés but without any real cops, there`s something to it. And so it is the obvious references to the well-known representatives of this genre that provide some really good laughs. Also the scenes in which Justin and Ryan realize for the first time what power the deceptively real-looking police uniforms give them have a very high comedic potential, which director Luke Greenfield (The Girl next Door) also exploits very well. The fact that the chemistry between the two main actors, who also play two flatmates in the series New Girl, is right and they make two really likeable loser types out of their characters also helps the film get over many a humorous low blow.

However, even though some of the gags work really well and the actors are convincing, there are just too many scenes that are just plain stupid or only bearable under the influence of alcohol and other mind-altering substances to leave a consistently positive overall impression. Too often Greenfield simply overshoots the mark and relies on clumsy sex jokes or churlish fecal humor instead of subtle wit. This wouldn't be a big deal if the comedy didn't show in places, in a genuinely funny way, what could have been gotten out of the idea of the two would-be cops. This problem is shown particularly well in a sequence where Justin and Ryan meet two real cops and are called out on an assignment with them. This scene is just wonderful at the beginning and makes for some really good laughs. But then, of course, the whole thing has to degenerate into a completely over-the-top gross-out gag, which is then dragged out completely unnecessarily.

Admittedly, subtle or subversive humor shouldn't be expected from a movie subtitled The Party Cops. The fact that it's more of a slash-and-burn kind of movie should come as no real surprise to anyone. But there are several comparable comedies that have shown that even simple gags can work really well, without necessarily having to aim below the belt at every opportunity. So Let`s be Cops - Die Party Bullen doesn`t give away its complete potential, but too much to be unrestricted fun. If you like deeper US comedy fare and are looking for an entertaining party movie for you and your buddies, you might be well served here, though, despite some hangs. And that's why the bottom line is a decent: Worth seeing with minor restrictions