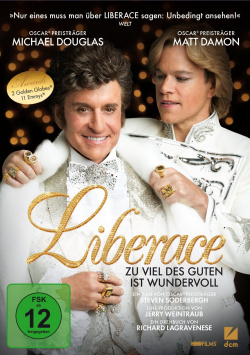 Liberace - Too much of a good thing is wonderful - DVD

Film: He was one of the most dazzling figures in American show business in the 60s and 70s: Wladzin Valentino Liberace, or Liberace for short, thrilled millions with his piano playing, his opulent costumes and his engaging manner. He always fended off rumours that he was homosexual during his lifetime and even took legal action against such allegations. But now it's no longer a secret that Liberace loved men. The story of one of these men is told by Steven Soderbergh in his latest film "Liberace - Too Much of the Good Is Wonderful", directed for the American pay station HBO.

The story focuses on Scott Thompson (Matt Damon), a simple boy from the province who earns his living as a dog trainer for television. When he meets the choreographer Bob Black (Scott Bakula) and he is invited on a trip to Las Vegas, Scott has no idea that his life will change forever. When he is introduced to the star pianist Liberace (Michael Douglas) after a show, the entertainer is immediately taken with the attractive young man. He quickly offers Scott to work for him, which soon becomes a passionate love affair. For Scott, his love for the world star and life in luxury becomes a veritable intoxication that makes him forget his own identity more and more. And so he falls into a spiral of drugs, beauty surgeries and jealousy dramas, at the end of which there can only be total self-destruction...

Since this story was simply too "special" in the eyes of many studio bosses for cinema exploitation, Steven Soderbergh had to shoot the film for American cable television. This didn't hurt his quality, but Michael Douglas and Matt Damon don't have any chance to get an Oscar for their achievements. And the coveted golden boy both actors would definitely have more than deserved. The way in which Michael Douglas depicts the dazzling figure of Liberace may seem almost parodistically exaggerated at first glance. But apart from the fact that Liberace was really such an exaggerated figure on stage, Douglas' play also shows how difficult it was for the people around him to get through the façade to the "real" Liberace. On the other hand, it also becomes clear how much the entertainer has always tried to keep up appearances. Be it that he was regarded in public as heterosexual or that he is always admired and loved by the people in his immediate environment. In spite of the always smiling face and the gentle, engaging manner, the Liberace, which Steven Soderbergh brings to life through Michael Douglas, is a very sad, almost tragic figure.

The same applies to Scott Thompson on a slightly different level. Having grown up as an orphan, he finally finds in Liberace the fatherly affection and luxury that he always lacked as a child. For Scott, living with "Mr. Showmanship", as Liberace was often called, is a single dream - a dream for which he willingly makes sacrifices. How Matt Damon embodies this character from his rather naive beginnings to a deep crash is simply great. Damon's acting talent is often joked about, especially one scene from the puppet movie "Team America" is often quoted to make fun of his wooden play. If you haven't yet realized that Matt Damon is a really talented actor, you'll learn a better lesson here.

Besides the great main actors, the other actors like Rob Lowe as a wonderful masked plastic surgeon, Dan Aykroyd or Scott Bakula deliver more than convincing performances. They all turn "Liberace - Too much of a good thing is wonderful" into a very big acting cinema, which can also convince in terms of costumes and equipment. The fact that the film is actually a TV production can't be seen in the work at any minute. Because what Soderbergh and his team have created here is great cinema!

The film offers humour and drama, tells an interesting and stirring story and also lets its actors run to top form. Even though Liberace is hardly known in this country anymore, these are all more than sufficient reasons to look at its history. Absolutely worth seeing!

Picture + sound: As befits a story about the radiant life of Liberace, the very clean image of the DVD offers powerful, atmospheric colors, a very good overall sharpness and an absolutely satisfactory detail presentation. The Dolby Digital 5.1 mix is dominated by dialogue and music. Every now and then, however, ambient noises and smaller sound effects make sure that the otherwise rather reserved tonal events are given a little dynamic. Good!

Extras: Besides a nice booklet, the DVD has a bonus: a good making of (about 13:27 min.) and some facts about Liberace (about 1:09 min.). In addition there are five uncommented backstage clips from the shooting (approx. 2:35 min.), as well as eight promo interviews with the actors and producers of the film (approx. 34:55 min.). The trailer and impressions of the German premiere in Berlin (approx. 4:21 min.) round off the additional offer.

Fazit: "Liberace - Zu viel des Guten ist wundervoll" is a wonderful mixture of humor and drama, spiced with first-class performances by Michael Douglas and Matt Damon. Steven Soderbergh's well-balanced direction always hits the right note and manages to avoid Liberace becoming a caricature or even a silly joke despite a certain exaggeration and despite the many humorous moments. A very successful biopic, which presents itself on the DVD in good picture and sound quality. The fact that there are some nice extras to add to this, only allows one rating at the end: Absolutely recommendable!