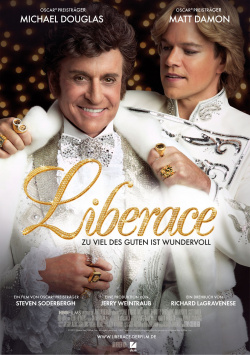 Liberace - Too Much of a Good Thing is Wonderful

He was one of the most colorful figures in American show business in the 1960s and 1970s: Wladzin Valentino Liberace, known as Liberace for short, thrilled audiences in the millions with his piano playing, opulent costumes and engaging manner. During his lifetime he always denied rumours that he was homosexual and even took legal action against such allegations. But by now it is no longer a secret that Liberace loved men. The story of one of those men is told by Steven Soderbergh in his latest film, Liberace - Too Much of a Good Thing is Wonderful, directed for the American pay channel HBO.

The story centres on Scott Thompson (Matt Damon), a simple boy from the provinces who makes his living as a dog trainer for television. When he meets choreographer Bob Black (Scott Bakula) and he invites him on a trip to Las Vegas, Scott has no idea that his life will change forever. When he is introduced to the star pianist Liberace (Michael Douglas) after a show, the entertainer is immediately taken with the attractive young man. He quickly offers Scott to work for him, which soon turns into a passionate love affair. The love for the world star and the life of luxury becomes a real intoxication for Scott, which makes him forget his own identity more and more. And so he falls into a spiral of drugs, plastic surgery and jealousy dramas, at the end of which can really only be total self-destruction.

Because this story was simply too special for a theatrical release in the eyes of many studio bosses, Steven Soderbergh had to make the film for American cable television. While this didn't hurt it in terms of quality, it deprived Michael Douglas and Matt Damon of any chance of being recognized for their performances with an Oscar. And both actors would definitely be more than deserving of the coveted golden boy. At first glance, the way Michael Douglas portrays the dazzling character of Liberace may seem almost parodically over-the-top. But apart from the fact that Liberace really was such an exaggerated artificial figure on stage, it also becomes clear through Douglas` acting how difficult it was for the people around him to get through the façade to the real Liberace. On the other hand, it also becomes clear how hard the entertainer tried to keep up appearances at all times. Be it that he was seen as straight by the public or that he is always admired and loved by the people around him. Despite the ever-smiling face and gentle, engaging manner, the Liberace that Steven Soderbergh brings to life through Michael Douglas is a very sad, almost tragic character.

The same is true on a slightly different level for Scott Thompson. Raised as an orphan, he finally finds with Liberace the fatherly attention and luxury he always lacked as a child. For Scott, life with Mr. Showmanship, as Liberace was often called, is one big dream - a dream for which he also willingly makes sacrifices. The way Matt Damon embodies this character from his rather naive beginnings to his deep fall is just great. After all, people always like to joke about Damon's acting talent, with one scene in particular from the puppet movie Team America often cited to poke fun at his wooden acting. If you haven't realized by now that Matt Damon is a truly talented actor, you'll be proven wrong here at the latest.

Besides the great leads, however, the other actors like Rob Lowe as a wonderfully masked plastic surgeon, Dan Aykroyd and Scott Bakula also deliver more than convincing performances. They all make Liberace - Too Much of a Good Thing wonderful great acting cinema, which is also fully convincing in terms of costumes and set design. The fact that the movie is actually a TV-production can't be seen at any minute. Because what Soderbergh and his team have created here, is great cinema!

The film offers humor and drama, tells an interesting and engaging story and also lets his actors to top form. Even if Liberace is hardly known in this country, these are more than enough reasons to see his story in the cinema. Absolutely worth seeing

Cinema trailer for the movie "Liberace - Too Much of a Good Thing is Wonderful (USA 2013)"
Loading the player ...