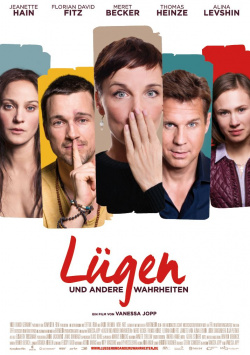 Lies and other truths

The nerves are on edge for dentist Coco (Meret Becker). Shortly before her wedding to real estate agent Carlos (Thomas Heinze), her doubts are growing as to whether her future husband isn't still keeping some secrets from her that would get in the way of a marriage. The fact that her best friend Patti (Jeanette Hain) has kept her relationship with the yoga teacher Andi (Florian David Fitz) a secret and that this leads to a break-up with her best friend shortly before the wedding finally makes her fly off the handle. The victim is her dental assistant Vera (Alina Levshin), who unceremoniously loses her job after a white lie. But since she urgently needs money to finance a vital operation for her father, she takes advantage of a secret she knows about the only seemingly peace-loving Andi. All involved get more and more entangled in a web of lies and half-truths, which will experience an unexpected showdown on the big wedding day.

With Lies and Other Truths, Vanessa Jopp (Forget America, Meine schöne Bescherung) ventures into the very difficult genre of the episodic ensemble film, which then also tries to make the grand walk between comedy and drama. Especially at the beginning, there are a few moments that reveal a refreshingly quirky sense of humor, which raises the hope that Jopp has actually managed to master this balancing act and enrich German cinema with a refreshingly non-conformist film. The fact that she was able to gather convincing actors in front of the camera supports this first positive impression even more. But it doesn't take long before the first disillusionment sets in.

Because Jopp simply doesn't succeed in making her characters really likeable despite all their quirks and shortcomings. Only Vera, a Russian living in Germany, and Carlos are characters for whose actions the viewer can develop something like understanding and sympathy. Coco is just exhausting with her need for control and her extreme jealousy, Patti is an extremely ego-centered person and even Andi with his suppressed aggressions is not exactly the most charming contemporary. That's really not because of the trying actors, but because of the somewhat unbalanced character drawing of the script. The script also has other weaknesses to show. For one thing, the story is dragged out badly in the last third and could have benefited significantly from a slightly tighter finale.

For another, the mix of over-subscribed humour and yet very dull drama just doesn't quite want to work. A good example of this is the character of Coco's neighbor, who is portrayed at the beginning as a somewhat goofy bimbo that you can definitely smile at. Behind this facade, however, is probably the most tragic character of the film, whose fate is really very sad. This embedded in moments of absurd comedy, such as the first glimpse of the dress Coco has chosen for her wedding, feels extremely out of place. This continues when Vera receives a visit from her brother, who puts extreme pressure on her, while Coco sets out to expose her intended as a liar. Certainly, even in real life, funny and tragic, light comedy and heavy drama are often very close to each other. Nevertheless, Jopp simply fails to create a unified picture out of the contrasting set pieces.

Lies and Other Truths has a lot of potential and numerous successful moments. But the overall picture seems too unbalanced and at times just exhausting. Despite the good actors and the really talented director, it can unfortunately only give a conditionally worth seeing

Cinema trailer for the movie "Lies and other truths (Deutschland 2013)"
Loading the player ...