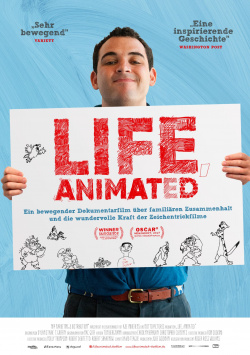 When their second son Owen came into the world, Ron and Cornelia Suskind's life seems perfect. Ron works successfully as a journalist for the Wall Street Journal, they moved into their little dream house, and spent lots of time with their two happy children. But at the age of three, Owen began to change drastically. Suddenly he could no longer speak properly and also showed enormous difficulties in his motor skills. After some examinations then the diagnosis: Owen is autistic. Whether he would ever speak properly again was questionable. This was the beginning of an extremely difficult time for the Suskind family. They could no longer get through to Owen. Only when they watched Disney cartoons together was there any obvious joy in the boy's face. But little did the family know then that these movies would become so much more. They will be the gateway to their son and, for him later, the gateway to an independent life. But the road to that goal is long and difficult.

Life, Animated is an extremely moving documentary, but with its life-affirming message, it is also an extremely beautiful documentary. Seeing, through video footage, the happy, lively Owen reenacting Peter Pan with his dad in the backyard before the boy just disappeared, as Ron Suskind puts it, really breaks your heart. Yes, the realization can definitely be called a bit manipulative at points like this, but that's not a bad thing here. Because Owen's story is more fascinating, more emotional, and more human than Hollywood's best writers could have dreamed up.

It's the story of parents who never gave up on their son and who, after long, difficult years, manage to reconnect with their son through the dialogue of Disney animated films, bringing him back into the world bit by bit. So much so, in fact, that at 23 they prepare him to move into his own apartment and take responsibility for his own life - a step that is as difficult for Owen as it is for his parents. Director Roger Ross Williams not only draws on interviews and private videos of the Suskinds, but also uses animation himself throughout to tell Owen's story. Even the story surrounding the boy's lost sidekicks is presented in this truly enchanting way.

Life, Animated impressively shows how a person who has actually given up on medicine, fights his way back into life with the unwavering help of his family, but also with his own imagination and love of animated films, and slowly learns to become a part of society despite the limitations that autism brings to him, even if that can sometimes bring fears, disappointments or even a broken heart. A film that gives you courage, that makes you want to live and that makes you see the world with different eyes. Absolutely worth seeing