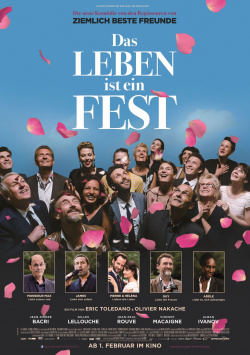 Life is a celebration

For decades, Max (Jean-Pierre Bacri) has been an absolute pro when it comes to organizing weddings. The wedding planner can realize even the most extravagant wishes, which is why the wedding of the somewhat stressful Pierre (Benjamin Lavernhe) and the shy Helena (Judith Chemla) in a stately mansion outside Paris should actually be a routine job. But on this day, everything that can go wrong simply does. An overly temperamental assistant, an arrogant musician, spoiled food, a photographer who never puts his foot in his mouth and also private problems make this day hell for Max. Now we will see whether he can be a full professional even in such a situation or whether it is time to hang up the profession.

With Life is a Feast, the directing duo Eric Toledano and Olivier Nakache have landed a new direct hit after their surprise success Pretty Best Friends. Whereas in their last film Today I'm Samba they tried a little too hard to combine the successful formula of their international blockbuster with political relevance, resulting in an incoherent mix of comedy and drama, here they concentrate fully on offering the audience lots of laughs with a high feel-good factor. Sure, the class of Pretty Best Friends is again not reached. But that is also due to the fact that its story was just so special and involving that an audience of millions was not only well entertained by it, but also deeply touched emotionally.

That is missing in Das Leben ist ein Fest and should not be expected, otherwise a certain disappointment could arise. Rather, the film is pure comedy with wonderful characters and very well observed situational comedy. Admittedly, some gags overshoot the mark and towards the finale it gets a little too silly in places. But in most moments the turbulent comedy is just a lot of fun. Even though a lot of things are clearly overdrawn, most of the characters seem to be taken out of life somehow. This creates a certain recognition value for the audience, through which the comedy is intensified.

Toledano and Nakache serve their audience a large portion of light entertainment here. Yes, it's not particularly sophisticated, nor does it really leave a lasting impression. But - and this is especially in times of constant bad news in the daily news - they offer with their film an entertaining escape from reality, which in the end impressively shows: Life is a celebration - and that should be celebrated every now and then. A charming, really funny feel-good comedy with good actors, some very funny ideas and a good dubbing. For this there is then also a clear bottom line: absolutely worth seeing!

Cinema trailer for the movie "Life is a celebration (Frankreich 2017)"
Loading the player ...