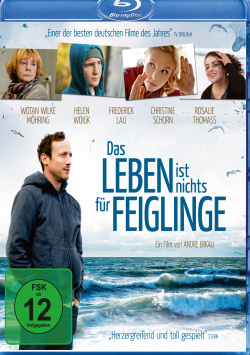 Life is not for cowards - Blu-Ray

Film: His wife's sudden accidental death not only throws Markus Färber (Wotan Wilke Möhring) off track, but also his daughter Kim (Helen Woigk). It is true that Markus tries to offer his daughter something like normality. But again and again he is overwhelmed by his grief and barely manages to do his job at a catering company. Kim, on the other hand, withdraws completely into her own world. In this situation Gerlinde (Christine Schau), the mother of Markus, of course doesn't want to burden her loved ones with further problems. And so she tells them that she is going on holiday at short notice instead of confessing that she has cancer. She now has to survive the therapy alone and only with the help of the somewhat cheeky nurse Paula (Rosalie Thomass). She, however, does not want to accept that Markus is avoiding his responsibility and she confronts the widower with his mother's illness. But Markus does not have much time to worry about. When Kim runs off to Denmark with the hot-headed school dropout Alex (Frederick Lau), he sets off together with Gerlinde and Paula to get his daughter back. It is the beginning of a turbulent journey in which the emotions boil over more than once...

With "Das Leben ist nichts für Feiglinge", the film adaptation of Gernot Gricksch's novel of the same name, director André Erkau tries his hand at a very difficult degree of drama and humour. Already in his last movie "Arschkalt" Erkau tried his hand at this mixture, even though the humorous part was much bigger. But in that case, the whole thing didn't work out. Despite good actors and some nice ideas the spark simply didn't want to ignite. He skilfully avoided the mistakes Erkau made in "Cold as ass" in "Life is not for cowards". The script and the staging are not entirely free of clichés. The figure of Alex, for example, is already drawn in a very stenciled way. However, the sensitive realization of the beautiful story and the good cast of actors comfort these small weaknesses easily.

What makes the film so successful is that it actually deals with very sad and difficult topics, but doesn't overwhelm the viewer with exaggerated heaviness of shock. On the one hand, the grief of Markus and Kim, their difficulties in dealing with the sudden loss and the impossibility of letting go are traced very well and movingly. And Erkau and (screenplay) author Gernot Gricksch have also hit the right note in dealing with the topic of cancer in the face of death. But since they repeatedly break up the melancholy caused by the theme with humor, the film doesn't leave behind depressive viewers, but shows that life can be beautiful and worth living even in such dark hours.

Not only the staging, but also the actors' play is the passion for this project clearly noticeable. Besides Wotan Wilke Möhring, who already played a very convincing grieving widower in the award-winning TV drama "Der letzte schöne Tag", Helen Woigk and the refreshingly crazy acting Rosalie Thomass ("Eine ganz hot Nummer") leave a special impression. The atmospheric camerawork of The Chau Ngo ("Tatort: Willkommen in Hamburg", "Almanya") and the atmospheric soundtrack contribute considerably to the fact that "Das Leben ist nichts für Feiglinge" has become a very beautiful tragicomedy, which friends of more sophisticated cinema from Germany shouldn't miss. Worth seeing!

Picture + sound: The Blu-Ray presents the film in a harmonious and very atmospheric way. While the DTS-HD Master Audio 5.1 Mix is very restrained in its appearance, but at the same time provides an absolutely harmonious sound carpet of dialogues, music and ambient noise, the picture is pleasing due to its pleasant colour mixing and high picture sharpness. Very good!

Extras: The bonus material of the disc is absolutely worth hearing and seeing. It starts with a completely relaxed, humorous and at the same time highly interesting audio commentary by director André Erkau and screenwriter Gernot Gricksch. In a relaxed atmosphere the two of them talk about the originally planned beginning, the play of the actors or about small hidden details which are of special importance for them. A nice commentary, which is perfectly complemented by the extensive Making of (ca. 48 min.). The mixture of interviews, shots from the shooting and film excerpts gives the viewer a good insight into the making of the film and the background of the story.

We continue with six short promo interviews (approx. 16 min.), seven edited scenes (approx. 8:30 min.) and some outtakes (approx. 4:54 min.). A video worth seeing about the premiere at the traditional cinema Lichtburg in Essen (approx. 5:21 min.), the trailer and teaser clips round off the very good additional offer.

Fazit: "Life isn't for cowards" is a very nice tragicomedy, which comforts with great actors, a captivating camera work and the stirring story about some small weaknesses. A more than successful film, which was given some very good extras and a convincing audiovisual implementation for the home cinema evaluation. There's one for that: absolutely recommended!