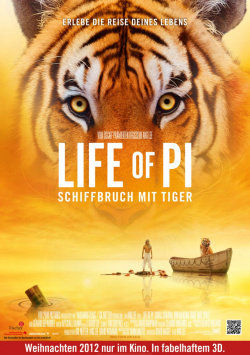 Life of Pi - Shipwreck with Tiger

If there is one contemporary director who stands for versatility and artistic mutability, it is undoubtedly Ang Lee. Hardly any film from the Taiwanese filmmaker's &OElig;uvre is the same as another, whether Lee dabbles in the superhero genre (Hulk), family drama (The Ice Storm), coming-of-age comedy (Taking Woodstock) or extraordinary romance (Brokeback Mountain). With his latest film, Ang Lee has again ventured into a challenge that is new to him and very special to the viewer: the film adaptation of Canadian Yann Martel's bestseller Shipwrecked with Tiger, considered by many to be unfilmable.

Life of Pi tells the story of 17-year-old Piscine Molitor Patel (Suraj Sharma), known as Pi, who lives a quiet life with his family in Pondicherry, India, in the 1970s. But the country is going through a period of upheaval and Pi's father (Adil Hussain), a wealthy zoo owner, fears that he will no longer be able to provide his family with the standard of living they are accustomed to in India. Therefore, the zoo is closed, all belongings are packed and the difficult journey to their new home in Canada is started on a Japanese freighter. But during a heavy storm the ship sinks and drags all passengers, humans as well as animals, into the cold, wet death. Only Pi miraculously survives and is able to pull himself into a lifeboat with the last of his strength. There, however, he is not alone. The tiger named Richard Parker was also able to get to safety before drowning. And so life-threatening dangers lurk for Pi not only on the vast sea, but also in the protective lifeboat. But the two disparate passengers must learn to live with each other if they are to survive this calamity. Given the instincts that guide Richard Parker, this is actually an impossible wish. And so Pi is really left with only one thing: his firm belief in surviving the shipwreck with Tiger.

Life of Pi is a truly magical cinematic experience that appeals to all the senses. Ang Lee has managed quite wonderfully to deal with some very deep philosophical and religious issues in an entertaining, at times very exciting, at other times extremely amusing or emotionally moving way. Not only has he managed the feat of doing dramaturgical justice to this very complex book. He has also created a technical masterpiece, for some of whose truly beautiful and fascinating images the word cinematic magic seems to have been virtually invented.

The real footage and the computer-created landscapes and creatures come together to form a wonderful whole. Although especially tiger Richard Parker is almost perfectly animated and you believe from the first moment that Pi actually has to share the lifeboat with the tiger, his digital origin as well as that of other visual elements cannot be completely denied. But since Lee doesn't just let his film be carried by the images, but bases them on a very beautiful story, the viewer easily manages to just immerse himself in the film and let all technical aspects and possible points of criticism completely fade into the background.

This is not only thanks to the beautiful screenplay adaptation by David Magee (When Dreams Learn to Fly), but also to the strong acting of Suraj Sharma, who delivers his impressive acting debut with his role as 17-year-old Pi. Considering that Sharma has to carry the film all by himself for long stretches with only the support of an animated tiger, the engaging result is really more than convincing. Even more experienced actors like G&eacute;rard Depardieu in a mini-role, Irrfan Khan (Slumdog Millionaire) or Rafe Spall (Anonymous) are completely upstaged by the up-and-coming actor and his animated co-star.

Life of Pi is quite an enchanting cinematic tale. Even if not all facets of the book could be captured and there are small dramaturgical lengths here and there, Ang Lee has once again proven to be a masterful director who perfectly knows how to stage great entertainment cinema with depth. And by the way, he finally created another 3D movie that doesn't just use this technology as a gimmick, but actually uses it to pull the viewer into another world. Rarely did the advertising slogan "Cinema - That's what movies are made for" fit as well as it does here! Absolutely worth seeing

Cinema trailer for the movie "Life of Pi - Shipwreck with Tiger (USA 2012)"
Loading the player ...