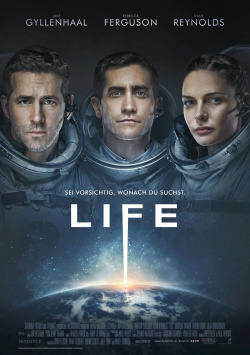 So there is! There is indeed life on Mars. A group of scientists on the International Space Station (ISS) have managed to not only detect an organism, but bring it to life. However, this quickly turns out to be a big mistake, because the organism is growing rapidly and knows only one goal: to eliminate the six people on the space station. When the relentless fight for survival results in the space station threatening to crash to Earth, there is only one goal for David Jordan (Jake Gyllenhaal), Miranda North (Rebecca Ferguson) and the other survivors: to prevent all of humanity from being put in danger.

Life actually makes use of almost only familiar elements. Much of what director Daniel Espinosa (Safe House) serves up here has already been seen in other films. Alien is just one well-known genre representative, which was obviously used here. Moreover, the trailer already reveals a lot - almost too much - about the course of the story. These are all points that should actually lead to yawning boredom for the viewer. But Espinosa and his team have actually managed to serve up the old familiar ingredients and the numerous clichés in such a way that the end result has become a truly exciting and gripping space adventure.

From the first few minutes, as you float with the protagonists in a dizzying fashion through the impressive and at times claustrophobic set of the space station, you are drawn right into the action. When it comes to the first moment in which it becomes clear that the alien organism could become a real danger, Espinosa cleverly uses little shock moments that quickly make you as a viewer forget the high recognition value of the story. From then on, the suspense screw is steadily turned up, with little surprises actually being deployed here and there.

About the last third should not be given away too much here. Only so much perhaps: Even if here as for the rest of the film also a certain predictability applies, so never even in the beginning something like boredom arises. And the ending works really well. Life proves that the wheel doesn't have to be reinvented to offer good cinema entertainment. Good actors, some great pictures, well-directed moments of terror and suspense and decent effects are enough to make the purchase of a movie ticket absolutely worthwhile. And therefore applies also under the bottom line here quite clearly: Absolutely worth seeing!