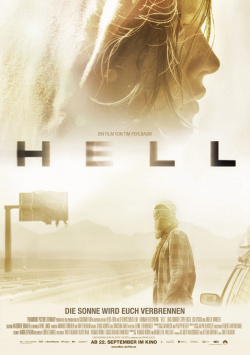 An apocalyptic horror movie from Germany? You can't imagine that? Director Tim Fehlbaum proves with the Roland Emmerich-produced Hell that thrilling genre entertainment doesn't necessarily have to come from abroad. One thing is for sure: after this film, I don't think anyone will be complaining that the sun has made itself so scarce this summer.

Because in Hell, the symbol of fine weather and good cheer has turned our planet into a lifeless, deadly desert. Water and food have become a rare commodity that many a person will go over dead bodies for. Marie (Hannah Herzsprung) fights her way in a darkened car together with her younger sister Leonie (Lisa Vicari) and her boyfriend Phillip (Lars Eidinger) towards the mountains, where there are supposedly water sources that have not yet run dry. During a stopover at an abandoned gas station, the trio meets Tom (Stipe Erceg), who tries to steal the three's few supplies but proves to be a helpful companion due to his skills as a mechanic. When they are ambushed in the middle of the barren wasteland, the small group of purpose is brutally separated. And soon the scorching sun seems to be the least of their problems.

Shot in a bark beetle-ruined woodland in Bavaria and in an extensively burned forest area in Corsica, Fehlbaum and his team have created a convincing apocalyptic world without much in the way of computer effects and with fairly simple means. In it, the protagonists fight their way through a story that at the beginning still seems like a German adaptation of the best-selling film The Road. Here, as there, we are shown in miniature how an apocalypse affects ordinary people. While there are some minor logic holes here and there, the bottom line is that the film succeeds very well in drawing the viewer into the bleak world of Hell.

In the second half, the end-time drama then turns into a tangible psycho-horror, in which especially Angela Winkler (Die Blechtrommel) delivers a very intense performance as the initially very caring farmer's wife, which evokes anything but sympathy from the viewer. Hannah Herzsprung confidently avoids the typical victim role, although her character is repeatedly put in hopeless situations and therefore experiences a lot of suffering. Lars Eidinger (Alle Anderen) has probably the most thankless role as the cowardly Phillip, but he masters it credibly. And Stipe Erceg and up-and-coming actress Lisa Vicari also deliver thoroughly convincing performances.

Hell certainly doesn't reinvent the genre. For that, the influence of other representatives of this subject shines through far too often in Fehlbaum's production. What makes this apocalyptic horror so worth watching is that, for one thing, it really looks like a theatrical production rather than a bloated TV movie, and that it manages to keep the suspense screw tightened until the finale. Sure, Hell can't quite stand up to the comparison to The Road, which in a way is imposing. But what Fehlbaum's film lacks in ambition and originality, it makes up for in entertainment value. So this visit to a post-apocalyptic world may not be quite the big head-turner, but entertaining genre entertainment is definitely on offer to the viewer. Worth seeing

Cinema trailer for the movie "Hell (Deutschland 2011)"
Loading the player ...