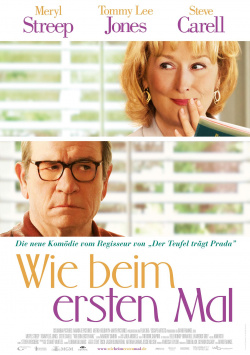 The marriage of Kay (Meryl Streep) and Arnold Soames (Tommy Lee Jones) has truly seen better days. After thirty years, only daily grind reigns, and there's no sign of passion or fire anymore. While Arnold is actually very comfortable with the situation and enjoys his daily routine, Kay suffers from the emotional coldness of her husband and the monotony of their married life. To change this, she decides to book a trip to the quaint town of Hope Springs, where renowned couples therapist Dr. Bernard Feld (Steve Carell) offers regular intensive treatments. Kay hopes Dr. Feld will succeed in bringing new spice to their dormant marriage. But instead of rekindling the spark, the sessions only stir extreme discomfort in Arnold, so that after a few days in Hope Springs, the couple's marriage seems to have failed for good...

For As if for the First Time, director David Frankel has teamed up with Meryl Streep once again after The Devil Wears Prada, though here, as a staid housewife, she has absolutely nothing in common with the wonderfully icy Miranda Priestly. Rather than bossing others around, Streep as the coy Kay lets her life be determined by the whims and caprices of her spouse and the needs of her children. And in this role, she can't leave quite the lasting impression that she did in The Devil Wears Prada. In this romantic comedy for the 50+ generation, it is not the multiple Oscar-nominated Streep who delivers an award-worthy performance, but Tommy Lee Jones, whose grumpy and unnerved facial expressions alone provide some of the film's most delicious moments.

However, even if it is precisely the first therapy sessions with Dr. Feld are incredibly funny precisely because of often only slight changes in Tommy Lee Jones' facial expressions, and Kay and Arnold's arguably cramped attempts to rekindle their love lives are also good for a few laughs, Frankel manages very well to skilfully circumnavigate any silliness that presents itself. More than once, the comedy runs the risk of becoming raunchy or even embarrassing. But rather than lash out with the humor club, Frankel opts for emotion or even drama at crucial moments. The fact that Arnold is so caught up in his habits and also in his ego, and that he doesn't manage to accommodate his desperate wife a bit, is then more sad than funny.

The fact that both aspects of the production succeed is precisely because Frankel has managed a good mix here. Funny but not too silly, emotional but not too cheesy, and dramatic but not frustrating, just beautiful. Buoyed by three wonderful actors, accompanied by a beautiful soundtrack and enriched with some nice dialogue and charming supporting characters, Like the First Time doesn't really offer much more than fairly standard Hollywood entertainment. There are no big surprises and also quite a few genre clichés are served without restraint. But since the whole thing comes across as heartfelt and wonderfully acted and the target audience is released into reality at the end with a good mood and a pleasant smile on their face, the film can be called absolutely worth seeing despite its ordinariness in good conscience.