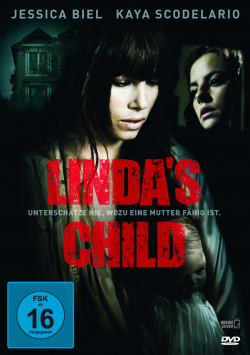 Contents: The young Emanuel (Kaya Scodelario) blames herself for the death of her mother who died at birth. Emanuel has a feeling she's not supposed to be here. This is expressed in a provocative and rebellious behaviour, which she repeatedly shows towards her stepmother (Frances O`Connor). When the closed Linda (Jessica Biel) moves in opposite, the girl is quickly fascinated by the single mother. Although she doesn't really like small children, she takes a job as a babysitter with Linda. Emanuel quickly feels extremely taken with Linda's loving nature and a friendship develops between the two in which the girl feels really secure for the first time. But then she discovers a terrible secret that could destroy everything right away...

"Linda`s Child" begins like a good, but still quite conventional youth drama. When the viewer meets Emanuel, gets a first glimpse of her dark inner life and watches her rebel against her father, stepmother and other authority figures, it all looks like a somewhat dark coming-of-age drama. When the girl gets to know Linda, the viewer quickly senses that something is wrong and the story takes on the light traits of thrillers like "The Hand on the Cradle". But even this impression doesn't last long, since director Francesca Gregorini reveals relatively quickly what secret the single mother carries with her.

Actually, after this premature revelation, the film would now have been doomed to lose all its potential tension and only ripple along to the finale in leisurely boredom. However, even though there are some lengths in the second half of the movie, the story manages very well to captivate on another level as well. We don't want to tell you too much about this here, it's just to say that the character of Emanuel and the development she makes through her friendship with Linda are interesting enough to carry the film. A prerequisite for this, however, is that you don't expect a high-voltage thriller, but rather adjust to a quiet drama.

The acting achievements of Kaya Scodelario, of whom you'll hopefully get to see a lot more in the future, and of Jessica Biel, who can finally prove once again that she can do much more than just look good, leave a special impression. Far too often in her career she has played roles in which she could reveal her attractiveness, but not her existing acting talent. But especially with roles in smaller productions like this one she manages to show some other facets of herself, which she does very well with this psychically but somewhat broken character.

"Linda`s Child" has some dramaturgical weaknesses and some small lengths. But overall the drama convinces both on an acting level, as well as with the unusual story, which at times is very beautiful in a dark way, then again depressing and sad. Anyone who appreciates American independent dramas and can also find suspense in the calm narrative flow should definitely watch this film! Recommended!

Picture + sound: While the Dolby Digital 5.1 mix sound remains rather unspectacular overall, but captures the oppressive atmosphere of some scenes very well, the picture of the DVD convinces with an atmospheric colouring, a high overall sharpness and well balanced contrasts. Good!

Extras: As a bonus there is only the trailer to see.

Fazit: "Linda`s Child" lets you assume at the beginning that you are dealing with a thriller here. But little by little the film changes into a moving drama that lives on its two great leading actresses. Even if the big twist of the story is already revealed after a short time, "Linda`s Child" remains stirring and exciting until the end. The DVD is technically well done, bonus material is unfortunately not available. Nevertheless there is a clear one for lovers of more demanding dramas: Recommended!