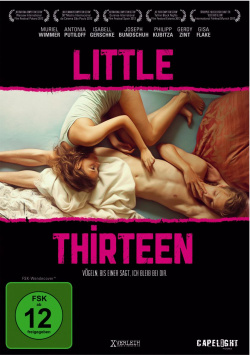 Film: Sarah (Muriel Wimmer) is thirteen years old. Actually still a child, one would think. But the time when Sarah played with dolls is long gone. Now boys are the most important thing in the life of the schoolgirl. Sex has long been part of everyday life for her and her friend Charly (Antonia Putiloff). Sarah doesn't really care who she goes to bed with. Until she meets 18-year-old Lukas (Joseph Konrad Bundschuh). He seems genuinely interested in her and not just in sex. For the first time, the girl feels something like a need for a real relationship. But whether Lukas sees it the same way seems questionable. Because until now, girls have only been a way for him to make a quick buck. He secretly lets his buddy Diggnsäck (Philipp Kubitza) film him having sex and then passes on these clips for money. So are his feelings for Sarah really genuine? Or is she also just another involuntary actress for him in his sex films?

Little Thirteen is filmmaker Christian Klandt's graduation film for his degree at the Konrad Wolf Academy of Film and Television (HFF) Potsdam-Babelsberg, made in support with X-Verleih. For the story, Klandt and screenwriter Catrin Lüth did intensive research and talked to many people of the age group they portray here. Cast with largely unused faces and atmospherically kept very authentic, Klandt has succeeded in creating a very strong drama that seems a little overdone here and there, but overall can leave an extremely intense impression.

There are two aspects that the film reflects frighteningly close to reality and that make it extremely important as a basis for discussion. On the one hand, there is the role of Sarah's single mother Doreen (Isabell Gerschke). Having had her daughter very young, she sees herself more as her friend and less as her mother - a phenomenon that can be observed far too often. She wears the same clothes as her daughter, is interested in the same guys and acts extremely permissive in front of her daughter. The pedagogical caregiver that she should be and that a girl like Sarah urgently needs, a mother like Doreen really does not represent.

The lack of a sense of responsibility that the mother displays is of course also transferred to the daughter. And that is the second aspect that makes Little Thirteen so important. For the teenagers portrayed here lack any sense of respect for their own bodies or for others, any sense of responsibility or shame. For instance, when Charly isn't bothered by the fact that Diggnsäck doesn't have a condom with him (I want to have my fun now) or Sarah wonders why Lukas doesn't want to have sex with her right away (This is the second time we've seen each other, after all), it becomes clear what the consequences can be when children aren't taught boundaries, scruples, or a sense of shame.

The film is an honestly uncomfortable and at times hard to take portrait of a generation where lack of perspective and a certain social network superficiality define the lives of young people who have been far too little of a child and are made to feel like they have to be adults far too soon. Certainly, the whole thing is not light entertainment, but extremely heavy fare. Moreover, there are a few little clichés or dramaturgical weaknesses here and there. But overall, Christian Klandt has succeeded in creating a really haunting and important youth drama, for which there is then also a deserved viewing value!

Picture + Sound: The film presents itself on the DVD in a very authentic look, which is achieved in particular by the coherent color scheme, well-matched contrasts and the decent image sharpness. The sound presents itself in a Dolby Digital 5.1 mix, which is mainly dominated by the dialogues, but every now and then can also score with rich bass and decent surround sound. Good!

Extras: The DVD has plenty of additional material to offer. It starts with an insightful audio commentary, which director Christian Klandt has recorded together with the author Catrin Lüth. The two talk in a relaxed atmosphere engaged about various aspects of the shooting, the research and the actors and provide the listener with some really interesting information. In addition, there is a good making of (approx. 22 min.), as well as scenes from the casting (approx. 8 min.) and from the rehearsals (approx. 7:30 min.). The disc also includes deleted and alternative scenes, optionally with audio commentary (approx. 45 min.), as well as some outtakes (approx. 4:30 min.) and the trailer. Finally, there is a conversation with Petra Winkler of Pro Familia on the subject matter of the film (approx. 7:30 min.)

Conclusion: Little Thirteen is a rather uncomfortable film that deals in a rather unflattering way with a disillusioned generation that seems to lack any sense of responsibility or respect and are driven only by social network superficialities rather than any real prospects for the future. Although the drama occasionally gets lost in somewhat stilted moments and slight clichés, it leaves a lasting impression due to the strong performances of the actors alone. No light fare, but if you appreciate thought-provoking up-and-coming German cinema, you should definitely watch this film. The DVD is technically well realized and also convinces with extensive and informative bonus material. Recommendable