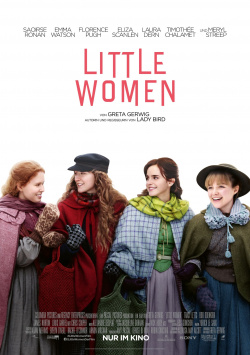 In mid-19th century America. Century, the four March sisters, Jo (Saoirse Ronan), Meg (Emma Watson), Amy (Florence Pugh) and Beth (Eliza Scanlen), grow up in a society where gender roles are clearly defined. But Jo in particular, who dreams of becoming a writer, does not want to be forced into this social corset. She doesn't want to get married and would rather lead a self-determined life. Meg, on the other hand, definitely dreams of starting a family with the right man. Amy, on the other hand, is pursuing a completely different path and wants to become a successful artist in Europe. When the neighbor boy Laurie (Timoth&eacute;e Chalamet) shows up in the Marchs' lives, not only Amy is taken with the young man. Jo's outlook on life is also sorely tested.

Little Women, the beloved novel by Louisa May Alcott, has been adapted for television and cinema several times. One of the best-known film adaptations ran in cinemas in Germany under the title Betty and Her Sisters. And more recently, a three-part mini-series based on the book was created. Although it sticks closely to the basic framework of the story, Greta Gerwig still manages to bring new sides to her version of the Little Women. Told from the perspective of Jo, an alter ego of the author, Gerwig focuses on the feminist aspect of the story even more than previous film adaptations. She does this not only through the dialogue, but also through the way she portrays the sisters - and Jo in particular. How the young woman uses skill and a sharp tongue to persuade a publisher to publish her writing is not only magnificently acted, but also quite wonderfully written.

The ensemble is very well cast, right down to small supporting roles. Whether it's Saoirse Ronan, who already wowed in Gerwig's Ladybird, Emma Watson or in a small supporting role the as always wonderful Meryl Streep - they are simply a great pleasure to watch. In terms of set design, cinematography and music, this film is also quite great. It all sounds great, and it is - with a few small deductions in the B grade. Because it also has to be said quite frankly that Gerwig does try to present her adaptation in a modern, clever and somewhat non-conformist way. In the end, however, her Little Women has also become very conventional cinema that hardly breaks any real new ground.

That's not a bad thing, because the story and the actors and actresses are so strong that it's hardly a negative that the production feels a little too forced at times. If you just want to be intoxicated by amusing dialogues, great emotions, beautiful costumes and great actors, this is absolutely the right film for you. For that, it definitely gets a: Absolutely worth seeing!