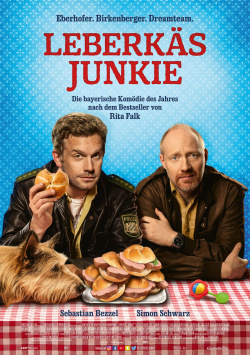 The Eberhofer Franz (Sebastian Bezzel) is dad. But there is no question of family harmony in his case. His girlfriend Susi (Lisa Maria Potthoff) has given him the slip and the Eberhofer is only allowed to see his son sporadically. So now he is a bachelor again and spends his free time drinking beer and eating liverwurst sandwiches. And at some point his body can no longer cope with this - the Eberhofer is put on a diet. And as if that wasn't bad enough, he also has to deal with a case of arson, which of all things lands Niederkaltenkirchen's greatest football hope in prison. Together with his buddy, the private detective Rudi (Simon Schwartz), Eberhofer gets to the bottom of it, while his body fights liver cheese withdrawal symptoms.

Leberkäsjunkie is the now sixth film adaptation of the popular Eberhofer crime novels by Rita Falk. The film adaptations are a real phenomenon, as here each part attracts more viewers to the cinemas than the previous one. Part 5, which was shown for the first time outside Bavaria at the time of its release, even managed to break through the magic million mark. The chances are good that the sixth film will also succeed in doing so. Because regular director Ed Herzog mixes the proven ingredients again to a wonderfully quirky whole, which lives above all from the wonderful interaction of the perfectly cast characters.

In particular Sebastian Bezzel proves once again to be the ideal cast for the non-conformist policeman Franz Eberhofer, who regularly brings his fellow men to the brink of despair (Zefix, Eberhofer!). It is the interplay with Simon Schwarz that provides the unmistakable tone of the series, which makes the films so popular even beyond the Weißwurst equator, despite their very Bavarian character. Quirky, wicked and always very charming - that's how fans know and love their Eberhofer films. And part 6 again delivers exactly what the audience expects.

Once again, the actual crime story is only a minor matter. Which is not to say that it is not also very entertaining. But in the end it is primarily about Franz and Susi, about Rudi, about the dad and his preference for hemp products (which this time is replaced by a new passion), about the grandma and about the other inhabitants of Niederkaltenkirchen. If you liked the first parts for these reasons, you will be entertained again. Sure, not every gag hits the mark, but in most cases the dialogues are extremely funny and wonderfully politically incorrect. Since one becomes quite easily the Eberhoferjunkie: Absolutely worth seeing!