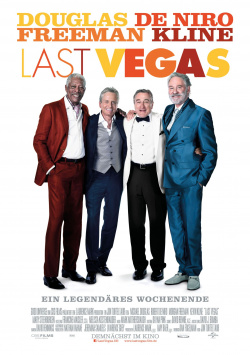 What the guys from "Hangover" can do, a squad of four Oscar winners consisting of old Hollywood stars can already long ago. At least that's what director Jon Turteltaub thought and sent Michael Douglas, Robert De Niro, Morgan Freeman and Kevin Kline on a very special weekend trip to Las Vegas. Here they meet Billy (Douglas), Paddy (De Niro), Sam (Kline) and Archie (Freeman) as old childhood friends again after years to celebrate Billy's wedding with the much younger Lisa (Bre Blair). Actually a reason to be happy, but old conflicts between Billy and Paddy hang like a dark cloud over the party weekend right from the start. The fact that the four gentlemen are no longer the youngest and that parties and binge drinking have long since been swapped for afternoon naps and heart pills is not exactly an advantage in a city like Vegas. But the sprightly pensioners don't want to let the fun spoil so easily. A high game win and a participation as a juror in a bikini competition later also nothing seems to stand in the way anymore. Until both the actually engaged Billy and the lonely widower Paddy become interested in the same woman…

"Last Vegas" seems to be only a geriatric version of "Hangover" according to the trailer. That this proves to be a fallacy is both the greatest strength and the greatest weakness of comedy. In the first half, the film offers good laughs almost every second. All of them come from the very overused category "Look here, we are old and have a lot of aches and pains". But the way these gags are transported by the actors is simple and fun. While Robert De Niro as Griesgram moves on very accustomed terrain, Morgan Freeman and Kevin Kline can convince with an almost mischievous game. How the older men assert themselves against arrogant youngsters or would-be machos is also extremely amusing because of the Oscar winner's game.

In the second half of the film, the number of gags decreases significantly. Here, the story places a lot more emphasis on emotionality, which also brings out some nice moments, but also runs the risk of slipping too much into the kitschy. And that's exactly what happens when Billy and Paddy finally talk or when Archie makes it clear to his overprotective son that he may be old, but that doesn't make him a helpless baby. While the humor at the beginning reveals something like bite every now and then, political correctness gains the upper hand towards the end. Director Jon Turteltaub thereby gives away a lot of the potential that the comedy revealed in its first hour and makes it an ordinary, completely interchangeable mass product.

Surely, the actors manage to avert the worst even here. Your play has enough obvious joy in these roles and enough sovereignty to absorb some script weaknesses. Nevertheless, even the concentrated power of the four can't prevent "Last Vegas" from moving further and further away from the movie it could and should have been. Surely, even the beginning is not really bursting with ingenuity and profound ambition. But at least the first hour offers the viewer a lot of fun and also some very nice plot developments. However, due to the overly sentimentality the whole thing flattens out to such an extent that at the end a really funny comedy only becomes a nice, ponderous and somehow unimportant movie fun, which nevertheless deserves to be "watched" with a few small compromises. But there would have been more to it!