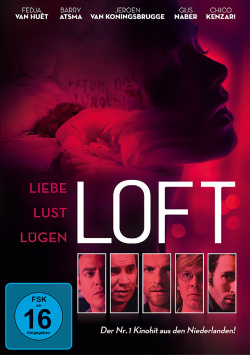 Film: The friends Matthias (Barry Atsma), Robert (Gijs Naber), Bert (Fedja van Huet), Tom (Chico Kenzari) and Willem (Jeroen van Koningsbrugge) share a big secret: together they have rented a representative loft apartment in the heart of Amsterdam, where they can live out all their extramarital desires, especially sexual ones, completely undisturbed. They hold firmly together to guard this secret, but their mutual loyalty is soon put to the test. Because one morning they find a dead woman naked and handcuffed to her bed in the loft. Since there are no signs of forced entry into the apartment, it is clear that one of them must be the murderer. While the mutual suspicions increase more and more, the puzzling puzzle slowly but surely comes together to an overall picture, which still holds several surprises in store for all involved...

With "Loft" the Belgian director Erik van Looy ("Murderer without Memory") was able to achieve one of the greatest successes in Belgian cinema history in his home country in 2008. No wonder, then, that it didn't take long for the successful story to be sold in other countries as well. Originally van Looy was not only supposed to direct the US remake with Karl Urban, James Marsden and Rachael Taylor, which will be released in 2013, but also the Dutch version. The latter, however, went to Antoinette Beumer, whose work did not always prove to be straightforward. For example, plans were broken to cast one of the smaller roles with her famous sister Famke Janssen. And then there was a serious accident on the set, in which Beumer was injured so badly that she dropped out for a few weeks. Van Looy then stood in for them and was able to stage some scenes of the Dutch version this way.

Despite these difficulties, the success story of "Loft" could also be repeated in the second version. In the Netherlands, the remake immediately jumped to the top of the cinema charts and belonged to one of the big box office hits of 2011. Like the original, this version did not make it to the cinemas in Germany. But of course this doesn't diminish the quality of this thriller. The cast is excellent, the equipment atmospheric and the nested staging can still captivate even if the original and thus the numerous plot applications are already known.

Surely the question may be allowed whether an almost identical remake was really necessary and whether one should not recommend the original instead of the fake. My personal opinion is that if a remake is as well done as this and it causes a good story to be made known and accessible to a wider audience, then such 1:1 remake is quite justified. Of course, the original is always preferable to the remake, but if you don't know van Looy's film and simply want exciting, cleverly constructed entertainment with slight erotic tingle and good actors, you can confidently reach for this Dutch movie hit. Worth seeing!

Picture + sound: The picture of the DVD pleases with a high picture sharpness, which can be maintained mostly also in the rather dark scenes. The reduced coloring in many scenes underlines the undercooled atmosphere of the movie very well. The sound remains rather restrained over long distances, but here and there music and smaller sound effects provide some dynamics in the surround range. Good!

Extras: Unfortunately the DVD does not have any bonus material to offer.

Fazit: "Loft" is an exciting thriller that can only be recommended to viewers who don't know the 2008 original from Belgium, as this Dutch remake is an almost identical remake. But if you don't know the original and don't want to wait for the already wacky US remake, you can warmly recommend this also very successful version of the cleverly constructed story.