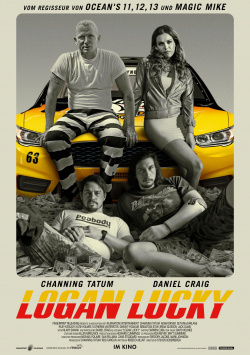 Things are not going well at all for Jimmy Logan (Channing Tatum). First he loses his job and then his ex-wife (Katie Holmes) opens up to him about moving to another state with their daughter. Without a steady paycheck, Jimmy won't be able to follow his daughter and may lose her forever. That can't be allowed to happen. That's why he and his brother, one-armed bartender Clyde (Adam Driver), decide that now is the time to take fate into his own hands - in the form of a heist in the very big game: Jimmy wants to steal the proceeds of the biggest NASCAR race in the world. But to do so, he needs the best safecracker in the country: Joe Bang (Daniel Craig). But he's in prison - and Jimmy has a plan for that, too. A plan that is almost too perfect.

Steven Soderbergh didn't last long in his self-imposed cinematic retirement. Just four years after his last feature film, he returns to the big screen with Logan Lucky. The hillbilly take on Ocean`s Eleven - a comparison he himself makes with a wink during the film - shows in a very entertaining way that it was a good decision on Soderbergh`s part not to let his retirement from the movie business last. However, you also get the impression in the first few minutes that the filmmaker, who is actually so accomplished, is a little rusty. The story takes a surprisingly long time to get going. There are some very amusing moments at the beginning, but the spark doesn't really want to ignite here yet.

But once the plot picks up speed, then the fun factor of the film clearly skyrockets. This is not only thanks to the script, which scores with cleverly constructed twists and amusing dialogues. Also the actors, who obviously had great fun with their roles, make this rogue comedy a very entertaining pleasure. Especially a blond Daniel Craig, who plays against his Bond image here with tremendous consistency, provides for some really funny moments that make some hangers-on at the beginning forgotten again.

Logan Lucky may not be the all-time great. But especially when Steven Soderbergh in the second half has found back to the old form and offers his audience just really great fun, then the small justified criticisms are quickly forgotten. If you just want to see an entertaining gangster comedy with a great ensemble, a cool soundtrack and some really funny scenes and can do without special depth or outstanding originality, you will be well served here. Absolutely worth seeing