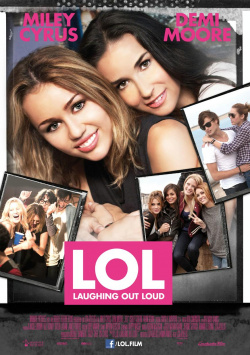 After the great success in France, director Lisa Azuelos was now allowed to shoot a remake of her teen comedy LOL - Laughing out loud for the American market. With Miley Cyrus, a leading actress who is very popular with the target audience could be won over, which additionally increased the chances of a successful reinterpretation of the amusing material. Unfortunately, though, Azuelos completely squandered the chance to tell her story in a new way that was more suited to the American market, and thus trashed a genuinely nice mother-daughter story into a bland, uninspired rip-off.

The story is exactly the same as the original: the carefree teenage life of 16-year-old Lola (Miley Cyrus), nicknamed Lol, comes to an abrupt end after the holidays when she learns that her boyfriend Chad has cheated on her. While Chad's best friend Kyle (Douglas Booth) tries everything to repair their relationship, Lola and him develop a tender bond - which Lol of course denies to others and herself out of consideration for Chad. Lola can expect little help from her mother Anne (Demi Moore). Although the two have a pretty good mother-daughter relationship, Anne is not exactly the best role model for her daughter when it comes to love. After all, the mother of three is currently facing the shards of her marriage, but can't really let go of her faithless husband (Thomas Jane). When Anne gets hold of Lola's diary while cleaning up and discovers a completely different side of her well-behaved daughter in it, the harmony between the two seems to be over for good.

LOL - Laughing out loud is a very good example of the fact that one country's recipe for success cannot simply be transferred to another country. Lisa Azuelos has completely squandered the opportunity to adapt her story to the American market, preferring to present a 1:1 copy of the French original, even going so far as to adopt the hairstyles of some of the actors and incorporate some of the songs heard in the French version here as well. The result, however, is that things that seemed charming and funny in the original film seem contrived and kind of forced here. Whether it's the actually very original and funny scene with a frozen chicken that has to be used for a particularly erotic video chat, or the play on cultural prejudices during the class trip to France (or England in the original), all of this seems somehow lovelessly cranked down and frighteningly soulless in the US version.

However, while with a lot of good will one can perhaps still claim that the plot elements surrounding Lola and her friends still offer some entertainment potential, especially for teenagers, this is so not true for the scenes surrounding the adult characters. The original French film was, after all, somehow a passing of her La Boum torch to a new generation for former teen star Sophie Marceau. Both her relationship with her movie daughter Christa Theret and her love triangle with her ex-husband and the handsome cop felt like an important and believable part of the story. Not so in the American remake. Even though the story is exactly the same and the dialogue has been changed very little, Mother Anne feels more like a foreign body and her story like completely unnecessary filler.

There are some positives, to be sure. Ashley Hinshaw is similarly adorable as her teacher adoring Emily, as is her French counterpart Marion Chabassol (again noting a clear similarity here) and for romantic teenage hearts there are some thoroughly enjoyable languishing moments. But other than that, there's little good that can be said about this uninspired remake. Lisa Azuelos somehow doesn't seem to have had much desire to retell her story again. She didn't even bother to teach Miley Cyrus how to hold a pen properly, which makes the scenes where she's supposedly engaged writing in her diary just seem ridiculous. The US version of LOL is purely a work for hire with no character of its own and no soul. If you want to see a nice version of the story, you should definitely pick up the French original. Otherwise, really only very loyal Miley fans and all girls who go into raptures over Douglas Booth will enjoy this one. Disappointing!