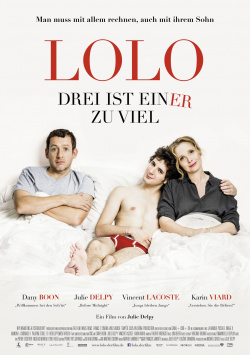 Lolo - Three is One Too Many

Actually, the somewhat clumsy Jean-Ren&eacute; (Dany Boon) is so not Violet's (Julie Delpy) type. Nevertheless, she falls head over heels for the nerdy computer scientist during a short vacation in the south of France. The two float together on cloud nine and when Jean-Ren&eacute; moves from the province to Paris, nothing really stands in the way of young happiness. But there is another man in Violet's life: her 19-year-old son Lolo (Vincent Lacoste). He enjoys being cared for by his mother, and he's not willing to share that with anyone else. With a perfidious talent for manipulation, he wants to break them up. But he has not counted on the fact that the supposed loser Jean-Ren&eacute; in the fight for Violet's heart is not so easily beaten.

With the comedy Lolo - Three is one too many Julie Delpy delivers after 2 days New York the next film, which she directed in personalunion as director, screenwriter and leading actress. Again, she plays herself a woman who repeatedly walks very close to the edge of hysteria. It's a role Delpy has been seen in far too often in recent years. She really needs to be careful that she doesn't end up like Diane Keaton, who for a long time now, despite her talent, has been stuck with the role of hysterical overmother, which is no longer charming or funny, but just annoying. And this phenomenon is setting in more and more with Delpy as well.

Additionally, her attempts to fish in the Sex and the City waters, when Violette talks loudly about sex in public with her best friend Ariane (Karin Viard), just seem too strained to work. It's not raunchy or funny, it's just awkward. And yet, the film hasn't become an annoying total washout, but actually works very well as light entertainment for long stretches. However, this is primarily thanks to the duel between Dany Boon and Vincent Lacoste (Boys will be Boys, Jacky in the Kingdom of Women). The way Lolo hides his truly mischievous intentions behind engaging charm and expertly fakes the image of the perfect son makes for some genuinely amusing moments.

Dany Boon operates in very safe territory and offers little that hasn't been seen from him before. But as a counterpart to Lacoste's devious horror son, Boon's slightly dorky nerd appearance is a perfect fit, especially since he's certainly allowed to show some unexpected sides to his character in the steadily escalating duel. Even though the story is heading towards a very predictable finale and uses a lot of familiar devices to make the audience laugh along the way, the production has enough wit and charm to make up for it. Admittedly, some scenes are too over-the-top and tug at the audience's nerves. But all in all, this romance with screwball-like obstacles is light French cinema entertainment of the more amusing kind. And for that, despite some weak points, there is still a decent: Worth seeing!

Cinema trailer for the movie "Lolo - Three is One Too Many (Frankreich 2015)"
Loading the player ...