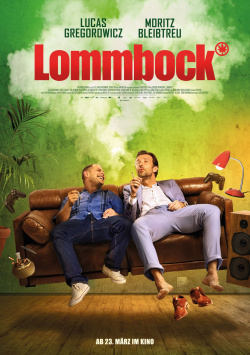 15 years ago Stefan (Lucas Gregorowicz) turned his back on his hometown of Würzburg. The time he spent with his buddy Kai (Moritz Bleibtreu) running the Lammbock pizza service with its very special cannabis special actually left nothing but wreckage, which Stefan is trying to forget in Dubai. Now, as a lawyer, he is about to marry the young businesswoman Yasemin (Melanie Winiger). But for that he still needs his birth certificate, which he has to pick up in Würzburg. No big deal, really, if it weren't for Kai, who is now struggling along rather badly with the Asian delivery service Lommbock. One last joint before the wedding for old times' sake - that can't be so bad. It can be, because in Dubai a urine sample is waiting for him, in which the cannabis would be detected, which in the best case would mean the dismissal from his job. So Stefan has to stay in Würzburg until the weed has been broken down by his body - time enough for his chaotic past to catch up with him again.

15 years have passed since director Christian Zübert brought a real cult film to German cinemas with Lammbock. Over the years, Zübert has developed enormously as a director, displaying extreme versatility with films such as the wonderful comedy Dreiviertelmond, the moving tragicomedy Hin und weg and the drama Ein Atem. To stop on this path and return to his beginnings is a bold, but also interesting move. Because much like Danny Boyle and his Trainspotting, it's exciting to see Zübert turn to the characters that started his directorial career 15 years ago with the experience he's gained in recent years.

It's obvious from the first few minutes of Lommbock that not only Zübert, but also his actors had great fun diving into the world of pizza and cannabis once again. The chemistry between Moritz Bleibtreu and Lucas Gregorowicz is spot on even after all these years, making the new film an amusing reunion with old friends for the viewer. A few elements from the first film are adapted and slightly varied, some running gags are revisited, but there is also an attempt to develop the characters and their story a little further - as is the case in real life over the course of 15 years.

Lommbock is funny and has some really good moments and delightful dialogue. However, a few gags are a little overused and at other moments the humor just overshoots the mark. But on the whole, Christian Zübert has succeeded in creating an absolutely worthy sequel to his cult film, which makes you want to pay Stefan and Kai more visits. Not quite as good as the predecessor, but for all fans of part 1 and lovers of deliciously crazy stoner comedies despite minor weaknesses still absolutely worth seeing!

Cinema trailer for the movie "Lommbock (Deutschland 2016)"
Loading the player ...