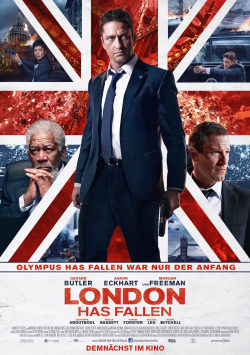 After the White House attack, life has returned to normal for Secret Service agent Mike Banning (Gerard Butler), bodyguard to President Asher (Aaron Eckhart). Now that his wife (Radha Mitchell) is expecting a child, he's thinking about quitting his job and pursuing something a little less dangerous. But then a particularly dangerous assignment comes up when the British Prime Minister dies unexpectedly and Asher has to travel to London with other heads of state for the funeral. There is no time to draw up a proper security plan and thus be able to guarantee the president's safety. And indeed, the supposedly well-protected funeral turns out to be a deadly trap for the politicians. Numerous deadly assassinations occur, which Banning and Asher can only narrowly escape. Now the two must run a bloody gauntlet through London to find a safe haven. But their enemies not only outnumber them, they are also extremely well organized. Luckily, Mike Banning is one badass professional terrorists better not mess with.

Following the success of the action smash Olympus has fallen, Gerard Butler now gets to step into the role of Secret Service agent Mike Banning for a second time. Babak Najafi (Banshee), who replaced Antoine Fuqua as director, has obviously tried to take London has fallen to the next level in terms of action and to be even less realistic than his predecessor. If you have a problem with dialogue dripping with pathos and stereotypical character sketches, you'll be tearing your hair out in despair after just a few minutes here. The portrayal of the individual heads of state, for example, is so clichéd that you can only get upset about it - at least if you take the film too seriously. Of course, the Italian prime minister is a lecher and the French president a wine-drinking bon vivant. And the somewhat dogged German Chancellor Agnes Bruckner (!) is not to be missed either.

Of course it is the US President who is the only one to survive the perfectly coordinated attacks. Who else would. It's all so over the top that you actually want to run screaming out of the cinema - if it wasn't so much fun. Yes, the script and direction aren't exactly brimming with intelligence and originality. But the completely politically incorrect style, spiced with lots of crisp patter, is pulled off so consistently here that it's just a sheer joy. When Gerard Butler kills the bad guys here and comments on it with one-liners reminiscent of the action thrillers of the 80s, it may not be particularly sophisticated- but it's entertaining all the same.

London has fallen is one of those typical brain off popcorn action flicks that are only really fun if you stick to that prompt. If the little grey cells are fully activated, then the film offers an incredible amount of attack surface for criticism. But if one has reduced the brain activity for a short time on the most necessary, then a nevertheless very pleasant entertainment factor unfolds, which probably just such viewers, who grew up with Schwarzenegger, Willis, Norris, Segal and Co. will appreciate thoroughly.

Even if Olympus has fallen was the better action film in terms of craftsmanship, London has fallen is a quite worthy sequel. If you're expecting more than mighty whoppers and cool lines, you're definitely in the wrong movie. If you're looking for solid action with 80s video store flair, on the other hand, you'll be well entertained. And for that there is then also a deserved: Worth seeing!

Cinema trailer for the movie "London has fallen (USA 2015)"
Loading the player ...