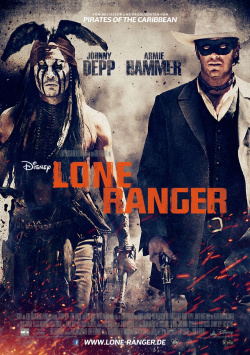 Never change a winnig team. True to this motto, star producer Jerry Bruckheimer, director Gore Verbinski and lead actor Johnny Depp have teamed up again after three successful Pirates of the Caribbean films to give new life to an American legend: the Lone Ranger. Started as a radio radio play in 1933, the masked avenger has been one of the greatest heroic figures in American pop culture. Almost 3000 radio play episodes, 221 TV episodes, a cartoon series, numerous novels, comics, films and of course accompanying merchandising made the Lone Ranger one of the very great American cult figures of the 20th century. After a long period of silence around John Ried and his faithful companion, the Indian Tonto, the time now seemed ripe for a rebirth of the Lone Ranger. In the U.S., however, the hoped-for success has failed to materialize.

But this can not be due to the entertainment value of the film. Because this is, apart from some hangs in the middle part, very high. The film opens in 1869, as peace-loving lawyer John Ried (Armie Hammer) travels back to his old home after years away. Also on the train are imprisoned scoundrel Butch Cavendish (William Fichtner), who faces death by hanging in Ried's hometown, and taciturn Indian Tonto (Johnny Depp). However, Cavendish is able to be freed by his gang and although Tonto saves John's life, he is imprisoned by his brother, Texas Ranger Dan (James Badge Dale) after the train derails. Along with his brother, who has been promoted to deputy, and six other Texas Rangers, Dan sets out to recapture Cavendish and bring him to his just punishment. But the Texas Rangers are ambushed and brutally murdered. But with the help of prison escapee Tonto and the very special horse Silver, John returns from the realm of the dead. Having come to terms with the fact that there are things between heaven and earth that he cannot explain and that he must come to terms with the somewhat peculiar Tonto, John has only one goal: to avenge his brother's death and finally bring Cavendish to justice. The Lone Ranger is born.

As they did with their Pirates of the Caribbean films together, the Bruckheimer/Verbinski/Depp trifecta once again presents a mix of adventure, big action sequences, some quirky humor, and a little fantasy in Lone Ranger. Some trademark things that made the masked hero so famous are of course not to be missed. Whether it's the famous William Tell overture, heard over and over again on the radio broadcast, or his legendary shout of Hi-Yo, Silver! Away!", Verbinski has also incorporated all of these into his new version of the heroic story. Still, it was extremely important to him to stage a version that was completely his own, and despite familiar set pieces, clearly different from other interpretations of the material. And indeed, he succeeded very well in imprinting his own signature on the film.

Integrated into the inherently rather loose events dark moments, sometimes a little wry humor and opulent visuals are about the hallmark of the filmmaker. The film is a feast for the eyes, provides again and again for some really good laughs, but is also exciting and, for younger viewers, maybe even a little bit scary. Still, it lacks the magic and charm that made the Pirates of the Caribbean movies so successful. For example, there are scenes here and there where the mix of humor and drama just doesn't want to work. For example, when many Indians have just been brutally slaughtered in a very intense scene, it's hard to laugh at Tonto and John again just two minutes later.

In addition, it's especially noticeable in the middle section that the film, at two and a half hours, has turned out to be far too long. Because here the whole thing ripples along too leisurely and can neither with the good actors, nor with the great visuals distract from the fact that the story has been pumped up with too many trivialities. The completely unnecessary frame story, in which an old Tonto tells his story to a young boy, or even the plot line around Red Harrington, played by Helena Bonham Carter, could have easily been cut without having a negative effect on the story. Especially the more action-packed moments make it clear how well the film would have benefited from a tighter production overall.

Because when it comes to the action, the timing is perfect and the film is able to unleash a tremendous amount of fun and entertainment potential. The interplay of music, special effects, camera, editing, fight choreography and comedy makes for extremely good humor, which would have been nice to see in this form not only in just under half of the film. After all, the once again reliable Johnny Depp, the convincing Armie Hammer and a wonderfully nasty William Fichtner ensure that even the weaker moments are still far from being really bad.

Lone Ranger is a good adventure film, a successful Western comedy with great equipment, good actors and some really great effects. But despite all these positive aspects, it is also a much too long, dramaturgically somewhat unbalanced film with unnecessary hangs, which threatens to fail because it simply wants to offer the audience too much of a good thing. Not quite a hit, but an opulent popcorn adventure with some great highlights is this ride through the Wild West. Absolutely worth seeing with a few minor drawbacks