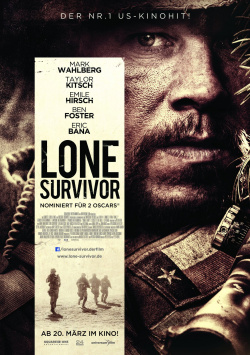 June 2005: It was supposed to be just a fairly innocuous routine mission, sending a four-man Navy SEALS team into the mountains of Kunar Province in Afghanistan. Petty Officer Marcus Luttrell (Mark Wahlberg), Lieutenant Michael Patrick Murphy (Taylor Kitsch), Second Class Petty Officer Matthew Axelson (Ben Foster) and radio operator Danny P. Dietz, Jr. (Emile Hirsch) are to verify the whereabouts of a high-ranking Talbian leader. At first, everything goes according to plan. But when the team arbitrarily changes positions for a better view, it sets off events that lead to a bloody disaster. Because in their new hiding place they are discovered by three goat herders. A heated discussion breaks out among the team about how to deal with the unwilling witnesses. But soon this question is the least of the Navy SEALS' problems. For suddenly they find themselves surrounded by a superior number of Taliban fighters in the impassable area and although they are able to eliminate numerous opponents, the enemy still clearly outnumbers them. And so begins a desperate fight for survival for the men - a fight in which there will be only one Lone Survivor.

Lone Survivor is based on the experiences of Marcus Luttrell, who recounts the events of the deadly mission in his book Lone Survivor: SEAL Team 10 Deployment to Afghanistan. The Authentic Account of the Sole Survivor of Operation Red Wings. While still filming his superhero hit Hancock, director Peter Berg knew he wanted to make this book into a movie. Berg, who already in Operation: Kingdom tried to recreate the war events in the Middle East with the means of the modern action thriller as exciting and at the same time authentic as possible, is obviously concerned to do justice to the sacrifice made by Luttrell's team comrades, without trying too hard the typical black and white painting of good and evil. Certainly, the enemy images are very clearly drawn. Still, Berg at least tries to refrain from generalizing and focus on the human aspects of the story.

In terms of the SEAL team, he aims to do that by showing them having boisterous conversations about their families or casually passing the time before they deploy, after emphasizing the importance of camaraderie within the Navy SEALS in a documentary-style opening credit. It's an ideal that only really takes on meaning, however, when the men face death in the hopeless fight against the all-powerful Taliban. The battles between the small unit and the Taliban fighters are relentlessly realistically rendered, making the horror of war downright palpable in some moments. Berg deserves a lot of credit for the fact that the whole thing doesn't degenerate into a senseless action baller with overstylized heroic figures.

However, he doesn't quite succeed in dispensing with typical war movie clichés and sledgehammer pathos. Although the latter in particular is kept within tolerable limits, the heroism of the U.S. soldiers and American patriotism are, of course, very much to the fore here, despite a few critical words. Berg does make it very clear that there are not only the evil Taliban in Afghanistan, but also people like Gulab (Ali Suliman), who rebelled against the Taliban and risked his life as well as that of his family to protect Luttrell. He makes it clear that not only the SEALS are real heroes, but also the brave inhabitants of the Pashtun village. Nevertheless, in the end the feeling remains that Lone Survivor is first and foremost a typical American hero story.

However, pure war propaganda, which some critics want to see in the film, has not become this cinematic treatment of the bloody mission. Peter Berg has directed a tense and rousing war thriller that strives for authenticity and only towards the end reveals the pathos that has been quite effectively avoided up to that point, but that leaves only a very slight negative aftertaste. For those who already appreciated Berg's Operation: Kingdom and see the film as an anti-war film despite the endless and very bloody battles, Lone Survivor is definitely worth seeing!