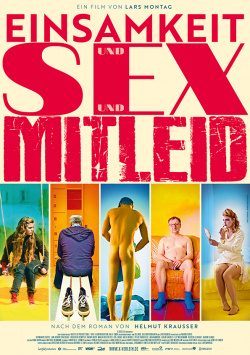 Loneliness and Sex and Pity

A teacher (Bernhard Schütz) who has lost his job after accusations from a girl. A lonely family man (Rainer Bock) who would so much like to have a friend. An artist (Katja Bürkle) who wants to confront her loneliness with the help of a dating portal. A doctor (Eva Löbau) who takes what she wants - especially from the guy at the escort service. A strictly religious boy (Aaron Hilmer) who despairs of the fact that he seems to love a girl more than Jesus. Or a policeman (Jan Henrik Stahlberg) who sees himself as a real guy and whose prejudices against migrants are confirmed everywhere in his everyday life. They all belong to the group of people who are bound together in a wild web of relationships and dependencies. Whether in their loneliness, in sex or through pity.

Loneliness and Sex and Pity is a truly special film. Especially because it manages to address very important issues in an unusual way. And also because it manages to evoke completely different emotional states in the viewer. The superbly written wordplay, laced with wicked cynicism, provides really good laughs time and time again, which only get stuck in your throat again a short time later. Rarely have you had such a good laugh and felt so depressed at the same time. Director and co-writer Lars Montag, together with Helmut Krausser, the author of the novel, has managed to filter out the essence of the very complex book and to transfer the cleverly woven web of the sometimes more and sometimes less obvious relationships between the characters to the screen.

They have succeeded very well in this, and not only through the jointly written screenplay. Also the very well chosen ensemble of actors, as well as the mixture of fascinating imagery and music ensure that the film gets under the skin of the viewer and leaves a lasting impression. On many levels the whole thing is an excellently observed portrayal of our society, which seems to be a bit overstylized and exaggerated. But on closer inspection, it is in the exaggerated moments that the not always comfortable truths lie, exposed in an almost playful, yet extremely intense way.

The film is certainly not easy and it is guaranteed that not every viewer will be able to engage with it. But those who find access to the very special tone that is struck here, will be offered a real highlight of German cinema. Wonderfully cryptic, often incredibly funny dialogues, deep black and politically incorrect humor, paired with a painfully true-to-life tristesse - these are the ingredients that make this ensemble piece stand out so clearly from the crowd. A simultaneously feather-light and leaden film, its craftsmanship alone earns it a clear conclusion: Absolutely worth seeing!

Cinema trailer for the movie "Loneliness and Sex and Pity (Deutschland 2017)"
Loading the player ...